If I Fought Matt Stajan

This all started while watching a Leaf game and witnessing Matt Stajan get slapped around behind the net, his helmet falling off and his receding hair line overwhelming the TV. Christ, he made my hair look like DJ Pauly D’s. Upon his being dominated, I called Matt Stajan a pussy and my mouthy little shit of a brother replied that Stajan could take me, and thus an on going joke of Matt Stajan beating me up was born that will now last a life time. 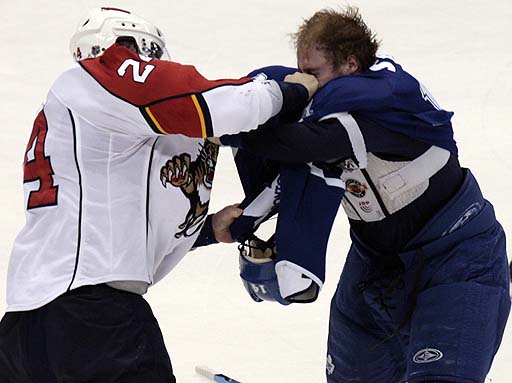 How It Would Happen

It would be in 2007 when he was still with the Leafs. I was in better shape. Weighing in around 200 pounds with not as much fat. Stajan would probably make eye contact with me in warm up. I would think to myself that he looked a lot like Jason Blake. Pale and sickly (pre cancer, I do have a heart) or like that guy from that movie Powder. He would say something to me, but I would just catch the tail end of it.
“Something….eyes”
I wouldn’t catch the first part. After circling and crossing the blue line, I would hear him again.
“You have nice eyes”
Stopping, I give back a confused “What the…”
Only to have him say it again. That prick. I wouldn’t know if he was playing some crazy head games with me or he just really liked my eyes. I’d skate off and he would have me a little shook. I knew if I had a chance to stick him or finish a hard check on him I would.
It wouldn’t be until the 2nd period when I would have my chance. I’d dump the puck in and chase it into the corner, only to hear him yelling at me “they are like marbles”. Again I’d be shook. I couldn’t believe Matt Stajan would be chirping me. Who is this little punkass. I would turn to face him and just as I’d make eye contact with him, his eyes would light up and I’d read his lips as he said “that’s what I wanted”. I wouldn’t stand for this, who the hell is this guy? I would come at him with my gloves off.

My gloves are off and I grab him. My first punch lands off his visor and I can feel the blood dripping from my hand right away. Then I can feel Mats Sundin slashing the back of my legs and then trying to facewash me. His reinforcements have arrived, as per usual. There is a mini pile up of players and I end up on top of Stajan. He keeps looking right into my eyes. What the hell?

I struggle to get off him and try and land punches with my right. My left hand is really stinging and bleeding a lot. I land a good right off his cheek and he seems to be stunned by it. I notice his gloves are still on and he is throwing punches with them on, just as a cat plays with a ball of yarn. I have an instant flashback of play fighting with my brothers on the backyard rink with full cages on.

I get most of his jersey over his head as he is too weak to fight back. With my eyes hidden from him now I try to land some good upper cuts. The refs can see that Stajan is in trouble and they jump in. Arms pull me away and Stajan finally pops his head out of his jersey, with blood dripping from his brow, his smile is gone.

I bleed the most but at least it was me that made me bleed my own blood. (Note to self make sure the bucket is off before trying to land some bombs).

Posted by Dirty Dangle at 9:43 AM
Email ThisBlogThis!Share to TwitterShare to FacebookShare to Pinterest