Every Monday we will reveal our fantasy players for the past week, as well as
our players to watch in the upcoming week for various types of pools 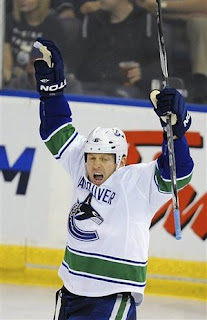 ﻿Here are your fantasy players for the past week and those to watch for:


Torres is a great pickup this week. Netting 5 goals, including 2 game winners and this beaut, Torres is making use of his 15 minutes a game and is definitely firing up the Canucks offense as they continue to roll. For a LW, Torres is a decent pick up in depth leagues for his contribution to penalty minutes as well. Karlsson is a nice sleeper pick if you were able to get him. With added time on the powerplay, Karlsson will continue to produce offensively and this week was only a preview of his scoring capabilities as well as defensive responsibilities with Karlsson posting a +4 rating. While many goaltenders had strong starts last week (honourable mention to Garon and Backstrom), Halak posted two wins, including a shutout, against two of the best teams in the league, and . Halak has won his last six starts as rolls on a seven game winning streak. With most of these wins coming in low-scoring-one-goal contest, the Blues can lean on Halak to steal wins for them.
Guys to look out for this week
Forwards
I hate picking big studs for guys to watch out for since you must be blind not to see Ovechkin as a guy that can get you points. But the Washington Capitals have 4 games this week and against some weaker teams. NYR, TB, BUF, ATL.
Look for at least 5 points this week from OV
Bold prediction of 8 points for the big guy. You heard it here.
Out West, we like Teemu Selanne. He has 4 games, and is racking up the points despite his age.
Defence
Going to give you 2 d-man to look out for since right now Mike Green should be picked for any weekly pools. 4 games this week and he gets more points then most forwards in the league.
Lubomir Visnovsky is a solid pick up right now in just basic point leagues. Already with 13 points in 15 games and quarter backing a solid Duck power play look for a few points this week with the Ducks also playing 4 games.
In between the Pipes
I am not a big Washington Capitals fan but they are all over the fantasy board this week. Michal Neuvirth is tied for the league lead in wins with 8 and with a friendly schedule this week he is a lock for 2 wins. He didn’t start Sunday so here is to hoping he plays 4 games this week and Semyon Varlamov is still out. In the West, look for Nicklas Backstrom to have a strong week. He’s been stopping everything lately, and with a road trip through this week he could continue to put up great numbers.
Editor Note: I have slipped in my Score.com weekly pick pool to 40th overall
Posted by Dirty Dangle at 12:08 PM
Email ThisBlogThis!Share to TwitterShare to FacebookShare to Pinterest