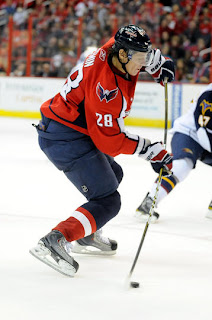 Semin is an easy pick for fantasy forward of the week. With strong offensive numbers and a +/- rating of +4, he was great in any form of fantasy pool this past week. Semin is riding an 8 game point streak in which he has 15 points, look for him to continue to put up strong fantasy numbers as Sasha usually gets PIMs and plenty of shots to boot. Tough competition to pick a fantasy defenseman of the week, with no D-men standing out too offensively, however Mike Green takes the honours. Strong in all fantasy categories thanks to a fight, Green continues to be one of the best fantasy D-men, not only because of the points he puts up, but because of his +/- and PIMs as well. Look for him to do well this week with 3 games on the Caps schedule. Carey Price is determined to prove his critics wrong, and he did just that this week. Posting up unreal numbers in his 3 wins this week, Price showed he can perform against the big teams as well, blanking the Canucks and stopping 34 shots against the Bruins.


Guys to look out for this week
Forwards
At forward this week we are going to go with Ryan Getzlaf. The Ducks have 4 games against , MIN, and EDM. Most of the teams they play this week have weaker goalies so look for the Ducks to put up some points (Ryan, Perry, and Selanne are solid secondary picks as well). In the East I am going to take a chance on Marian Gaborik. No guts no glory.
Defence
If you need a star D-man in a pool to double your points, go with Dan Boyle, who has 4 games against LA, , , . Boyle is having another strong season so far with 12 pts in 15 games and is a solid pick in any pool when he has 3+ games in a week. In the East, Mike Green is once again a solid pick with 3 games, and Tobias Enstrom could also put up great offensive numbers with the Thrashers on a home-stand this week.
Between the Pipes
In between the pipes look for Jonathan Quick to get a few wins. He has 9 wins in 10 games so far for the Los Angeles Kings who are atop the Western Conference. In the East, it’s hard not to go with Tim Thomas right now with his 8 wins in 10 games. I want to bite on Ryan Miller who has a 4 game week, but .
Posted by Dirty Dangle at 11:45 AM
Email ThisBlogThis!Share to TwitterShare to FacebookShare to Pinterest