Every Friday we will be adding one of our favorite hockey videos from over the years. Some might be painful, some might be dirty, but they all have a story behind them that we will share that make them downright awesome and great to watch over and over again.
Growing up in it’s hard not to be a Leaf fan. Being a young goalie and growing up with the team, you see your idols playing and want to be like them. I really feel sorry for young goalies the last few years that now have the same playing style as Vesa Toskala.

When I was a kid I would always try and play like the guys I saw on TV. When I was 9 I loved Allan Bester mostly because we were the same height. I even made foam goalie pads for ball hockey and painted them just like Ken Wregget’s.


Then along came some skinny kid nicknamed the Cat. It was in the 1991-92 season that Felix Potvin was first called up for a few games and played well. And that is when I started playing like him. Paddle low so nobody could score on the ice and would make the shooter try and go glove. Thank god I had a good glove hand.


Despite his play, he was sent back down because the Leaf’s still had Grant Fuhr playing full time. I can remember playing in a hockey tournament in
We had a hotel right next to the rink and my coaches joked around that the Baby Leafs were staying in our hotel. We didn’t believe them until I went to play some arcade games in the lobby area and there of course was Felix Potvin playing Street Fighter with another player. I was star struck and couldn’t talk. He was the coolest video gaming playing guy I ever saw. And he was kicking ass at Street Fighter playing with Ryu.

Which brings us to this famous goalie fight. I think when we all saw Ron Hextall heading down the ice we thought Felix was doneski.
November 10th 1996
Toronto Maple Leafs vs Philadelphia Flyers
Felix Potvin Vs Ron Hextall
I don’t know how the good people at hockeyfights.com have this fight as a draw.

Yes, Hextall was throwing a lot of wild and crazy punches. But Felix landed some nice uppercuts and Hextall was left bleeding all over the place after the fight. 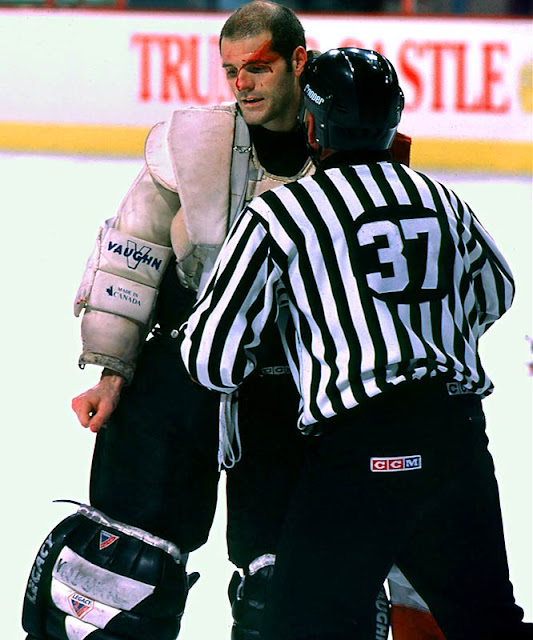 Posted by Dirty Dangle at 8:47 AM
Email ThisBlogThis!Share to TwitterShare to FacebookShare to Pinterest