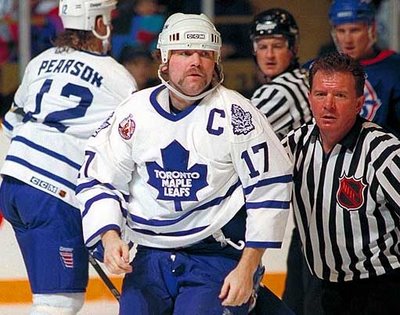 We will begin with one of our all-time favourite Hosses. This player never backed down from any opponent, despite his 5'11", 200lbs stature. He played the game as hard and intense as anyone. Fighting much bigger players than himself, throwing big hits to fire up the team, and potting goals in the clutch; this player exemplified what it means to play with heart. He also had awesome handlebars. This player is Wendel Clark.

Drafted first overall at the 1985 NHL Entry Draft, Wendel came to the struggling Maple Leafs and lit a fire. Clark would become the team captain in 1991, and would help lead the Leafs to that memorable (or forgettable) Conference Finals in '93 against the Kings. Clark's big hits earned him the nickname "Captain Crunch" and made him one of the most feared players on the ice - just ask Bruce Bell.

"Game in, game out, year in, year out, just a kid cruising the ice looking to cause trouble - a wicked wristshot for a goal, a crushing bodycheck, a fight - opponents' bodies littered on the ice, fans out of their seats, the place in an uproar, and Wendel, no expression on his face, looking around wondering what the commotion was about."--Ken Dryden

Wendel always found his way home to the Toronto Maple Leafs, where he was loved by the home fans, and feared by opponents. Arguably the most popular Leaf in the modern era,  was honoured in 2008 by having his number raised to the rafters of the Air Canada Centre. Ask any Leafs fan about  and I’m sure you’ll hear a story of Hoss proportions.

This video pretty much sums up what being a Hoss is all about, and Wendel was one of the best at it. Welcome to the Hall, Wendel.

Posted by Dirty Dangle at 8:06 AM
Email ThisBlogThis!Share to TwitterShare to FacebookShare to Pinterest