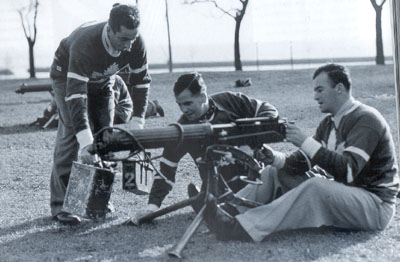 Today, we remember the sacrifices made by members of the armed forces in times of war. We remember our veterans who fought and died for our future. We honour them with ceremonies and poppies, and Dirty Dangle would like to honour those NHLers that fought in the two great World Wars with a special post.

The National Hockey League and its predecessor, the National Hockey Association (NHA), not only survived the World Wars, but built their foundation on them. Many players enlisted and shipped out, allowing for minor league players to shine, or in the case of the Brooklyn Americans, a team to fold (they suspended operations in 1942, both due to financial difficulties and the number of players serving in the armed forces). This led to the Original Six era, also known as the Golden Age of Hockey.
During the World Wars, the league suffered few casualties despite having over a hundred NHL players fight in both Wars (remember, the league had at most seven teams during these times with 15-18 man rosters) . Known casualties of the World Wars include Allan “Scotty” Davidson in World War I, as well as as Dudley “Red” Garrett and Joe Turner in World War II. While some NHL teams have already had their ceremonies, we give you ours.

Allan “Scotty” Davidson – Davidson dominated junior, winning back to back OHA Championships with the Kingston Frontenacs. He moved on to the NHA (pre-NHL league) to play for the Toronto Blueshirts from 1912-1914 where he was an over point-per-game player. In his 2nd and final season, Davidson captained the team to capturing the Stanley Cup in 1914. Davidson enlisted for military service when World War I broke out and was killed at the young age of 24 on June 16, 1915 in Belgium. Davidson's name is inscribed on the Vimy Memorial as Lance Corporal Allan Maclean Davidson. Davidson was inducted into the Hockey Hall of Fame in 1950. 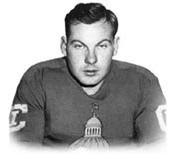 Joe Turner - Turner was a promising young goaltender in the Detroit Red Wings franchise. Leading the OHA in GAA in three separate seasons while in junior, Turner was finally promoted the Red Wings farm team, the Indianapolis Capitals of the AHL. Turner shined in his first AHL season, winning 34 games, he was the leagues best goaltender and led the team to capture the Calder Cup. Turner got to play in one game in the NHL as a call up, tying the Toronto Maple Leafs 3-3. Although Canadian, Turner opted to fight overseas and joined the United States Marine Service. Sadly, he was killed in action on January 12, 1945 in . In memory of his service, the International Hockey League named their championship trophy,the Turner Cup, after him. 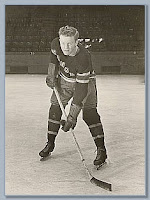 Dudley Morine “Red” Garrett – Garrett was a solid defencemen who played for the Toronto Maple Leafs during trials, before being traded to the New York Rangers. He would play 23 games in the 1942-43 season before enlisting in the war effort. Garrett joined the Canadian Navy and on November 25, 1944, lost his life when the ship he working on during a destroyer escort with was torpedoed off the coast of Newfoundland. In 1947, he was honoured by the AHL when they named their rookie of the year trophy after him, the Dudley (Red) Garrett Memorial Award.

For all those who have served and currently serve - thank you.
Posted by Dirty Dangle at 10:52 AM
Email ThisBlogThis!Share to TwitterShare to FacebookShare to Pinterest