﻿﻿﻿﻿﻿After an eventful Saturday of hockey, and probably heavy drinking, its time to relax and recover on the action across the country. Catch up on some teams and highlights you may have missed while trying to get that blonde's phone number last night.
Solid saturday night with 11 games to follow, including five Canadian teams in action. Some major story lines in Leafland including Kadri call-up and Phil Kessel finally finding the net. Dirty Dangle also sends its condolences to the Richardson family for their loss this weekend.
Toronto Maple Leafs
The Leafs lose 8th in a row, but they do play the Devils this week!
http://www.torontosun.com/sports/hockey/2010/11/13/16129391.html
Ottawa Senators
Sens blank Bruins, but tragedy strikes Sens assistant coach Luke Richardson.
http://www.ottawacitizen.com/sports/hockey/ottawa-senators/that+more+like/3825244/story.html
Montreal Canadiens
Canadiens win in a blowout, but Markov hurt.
http://www.montrealgazette.com/sports/Habs+Markov+injured+bittersweet+rout/3825340/story.html
Vancouver Canucks
Canucks press discusses how much the Leafs suck
http://www.vancouversun.com/health/Burke+grief+trumps+frustration+terrible+year+almost+over/3822717/story.html
Edmonton Oilers
The Oilers visit the Big Apple for an afternoon game, and are very high on Ryan Whitney
http://www.edmontonsun.com/sports/columnists/robert_tychkowski/2010/11/13/16128946.html
Calgary Flames
Sharks drop Flames despite late comeback
http://www.calgarysun.com/sports/myflames/2010/11/14/16131821.html
HIT OF THE NIGHT

GOAL OF THE NIGHT

Dirty Dangle would like to congratulate the Team Canada women on winning the Two Nations Cup in overtime against, you guessed it, the United States. 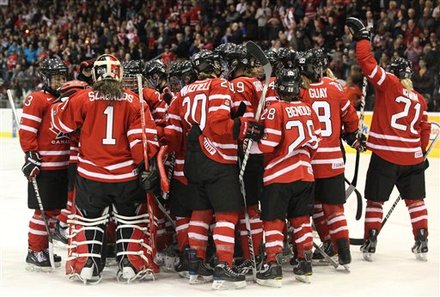 Posted by Dirty Dangle at 1:15 PM
Email ThisBlogThis!Share to TwitterShare to FacebookShare to Pinterest