When is Brian Burke Letting Ron Wilson Off the Bus? 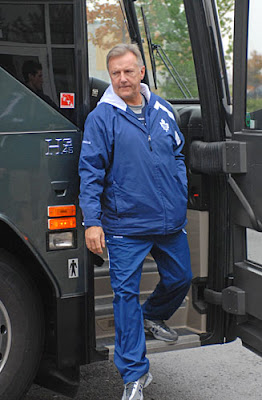 After a 10 game losing streak, the New York Islanders fired Scott Gordon earlier this week. This firing has prompted the question on most Leafs fans minds, is Ron Wilson next?
While Brian Burke continues to give Ron Wilson his vote of confidence, the calling for Ron Wilson's replacement in Leafland is still very loud.
However, Brian Burke has made it clear that he in charge of the struggling hockey club, and gave this fun quote last week with the calling up of Nazem Kadri and Keith Aulie:

With the Leafs ending their eight game losing skid with a powerplay comeback win against Nashville, the talks for Ron Wilson's firing have cooled until the next game. Wilson's future may remain unknown, however his past seasons with the Maple Leafs can still be used as a measuring stick to compare to the Islanders Scott Gordon.

Here is Scott Gordon's coaching record with the Isles:


And here is Ron Wilson's coaching record with the Leafs:


That's a total of 155 pts in the last two seasons for Ron Wilson and his Leafs.

Scott Gordon and his team that is barely around the cap minimum, managed 140 pts in those two seasons.
Both teams had brutal records. But the Islanders were smart enough not to deal their picks away and also had mostly young and cheap players playing.
The Leafs Cap hit for 2010 is $54,563,324
The Isles Cap hit for 2010 is $42,608,309
How bad will it get in Leafland before Burke fires his old buddy. If Darryl Sutter can trade his son, I think Burke can fire his friend . Burke can say all he wants in the media that Ron Wilson’s job is safe. But if the team keeps losing there is no way he can just sit there and watch another top draft pick go to the Bruins.
The Leafs don’t have to make the playoffs. But if the Bruins were drafting 10th this year instead of a top 3 pick, I think most Leaf fans could handle that.
What do you think?
Is it time for the Toronto Maple Leafs to fire Ron Wilson?


Also, Happy Birthday to great skater and Dirty Dangle reader Lucas
Posted by Dirty Dangle at 7:56 AM
Email ThisBlogThis!Share to TwitterShare to FacebookShare to Pinterest