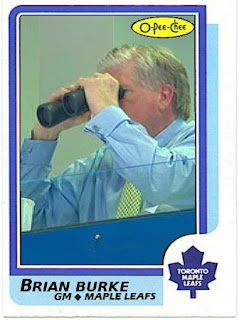 It’s the two year anniversary of Brian Burke coming to the Toronto Maple Leafs and taking over as General Manager and President. Burke's arrival two years came with an unforgettable press conference in which he inspired and gave far too much optimism to Toronto Maple Leaf fans. You can watch Part One and Part Two of that press conference if you want, however there were only a handful of quotes that stuck with Leaf fans today. Parts of these quotes would be overused by television commentators and fans for months, hoping the Leafs would finally turn things around and form a new identity than that of a last place finisher who got bullied every night.
Some of the key quotes from that press conference included:

"We require, as a team, proper levels of pugnacity, testosterone, truculence and belligerence. That's how our teams play."


"I make no apologies for that. Our teams play a North American game. We're throwbacks. It's black-and-blue hockey. It's going to be more physical hockey here than people are used to."

The Leafs are more North American, with only 5 non-North American skaters on the team. But are they more physical?

Development? Oh right… Kadri is drawing a lot of penalties and Andrej Sekera took some good runs at him on Friday night with no response.
Based on these quotes, we’ve decided that truculence and black-and-blue hockey include hitting, blocking shots and fighting majors.
So far this year:
Last season 2009-2010:
2008-2009 Season:
Since the lockout and Before Burke (BB), the Leafs averaged only 26 fights in those 3 seasons, with their highest total being 29. The Leafs averaged 1738 hits BB for an average league rank of 7.3, and averaged 1087 block shots for a league rank of 12.6. After Burke (AB), the Leafs have averaged 1770 hits for a rank of 14.5 in the last 2 seasons, and averaged 1235 blocked shots for a league rank average of 6.

With this said, has Burke’s truculence and belligerence promises been met?
The top 6 forwards the Leafs roll out every night get pushed around and none of them fight back and stand up for themselves. Most of them don’t even hit. Nikolai Kulemin is the only one out of the top 6 that finishes his checks. It makes the Leafs a very easy team to play against. If the Leafs are going to get shutout out most nights, it would be nice for them to show some emotion and finishes their checks and drop the gloves once in awhile.
It is only fitting that was recently named the Most in
Here is a much better recap of Burkes past two years:
http://www.thestar.com/sports/hockey/nhl/mapleleafs/article/898220--team-burke-still-under-construction

Posted by Dirty Dangle at 4:05 PM
Email ThisBlogThis!Share to TwitterShare to FacebookShare to Pinterest