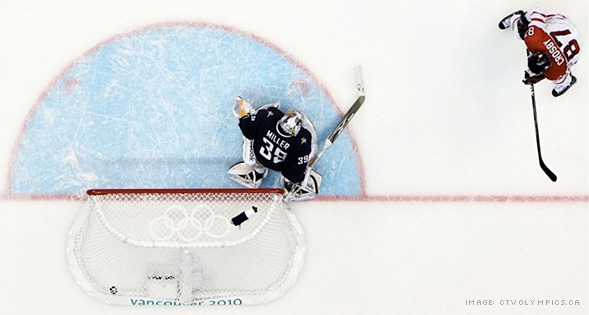 It's been a fun year for Dirty Dangle. Since launching our site in late October, we've had some fun times with the site. We've become a dotcom, interacted with people in hockey who we otherwise wouldn't have had the chance to, and we've made some people laugh. On the eve of a new year, we want to share with our favourite moments in hockey, as well as with the site.

Sidney Crosby's Golden Goal is easily our top moment of the year. Crosby was having a pretty bad game, but there he was in overtime, potting the tournament winner against the best goalie in the NHL. Replays still give us goosebumps, and if you look closely in the above clip, you can see just how badly Ryan Getzlaf is going bald at 0:40. We'll always remember where we were that day for the rest of our lives.
As for our favourite Dirty Dangle posts:

So many great posts in such a short time, but I am a fan of the sentimental posts. My favourite so far was the Boot Hockey post. So many nights were spent outside playing with old buddies and my brothers. It was a great time and every game felt like game 7 of the Stanley Cup Finals.

Tobias - My Encounter With Rick Nash

This brought back some great memories from when I met him and I became his biggest fan for a few months. It also brought some hilarious shared encounters our readers have had with other NHLers. We still have some other encounters to share with you, so stay tuned for a Marc Andre Fleury piece in the new year.

I'm sure you've watched or read many Year in Review shows this week, but here are some links to some highlights from the past year we've enjoyed reading:
Have fun tonight and remember the great year that was 2010.


- Dirty Dangle
Posted by Dirty Dangle at 6:09 AM
Email ThisBlogThis!Share to TwitterShare to FacebookShare to Pinterest