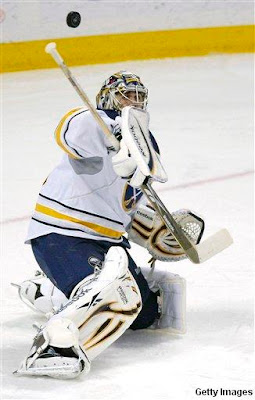 Here are your fantasy players by position for the past week:

Crosby continues to tear it up like a pair of ripped jeans , extending his point streak to 15 games. With 6 points this week he was again tops in the league for the week, and continues to pull away from Steve Stamkos in the scoring race. With an easy schedule this week, don’t be surprised if Sid is mentioned here again next week. Roman Hamrlik lead the way for defencemen this week posting 5 points. With Andrei Markov out for the year, look for Hamrlik to get more minutes against other teams top lines (more PIMs). Ryan Miller had a great week. Not only did he have a full 6 days off to practice guitar, he posted back-to-back shutouts this weekend to carry the Sabres. Miller is playing great since returning from injury; however will have his hands full this week against the Bruins, Sharks and Penguins.
Guys to look out for this week
Forwards
Ron Maclean’s boy Brad Richards and his Dallas Stars have 4 games this week. The in the off season hasn’t let early trade talks get to him this year and has posted 30 points in 25 games. In the East only 2 teams have 4 games this week and it’s the Leafs and Caps. I have Alexander Ovechkin as my star forward for the east. He may not be scoring as much this season, but still putting up points. If you want to take a risk on some sleeper picks, you can go with Kessel or Versteeg.
Forward Leading Scorer:
Sidney Crosby with 46 Points in 28 games


Defence
Dan Boyle of the San Jose Sharks has 19 points in 24 games this year and the Sharks have 4 games this week. Nik Lidstrom is also someone you should be starting. In the east Mike Green who has started off pretty slow and battled some injuries could have a big week with 4 games this week and against some weaker teams.
Defence Leading Scorer
Kris Letang with 26 Points in 28 games


Between the Pipes
Jimmy Howard and the Detroit Red Wings have 4 games this week. Howard is leading the west with Cy Young numbers: 15 wins in 19 games. In the East the Washington Capitals have 4 games against , , , NYR. Look for Semyon Varlamov to get at least 2 wins as he has been playing more then Michal Neuvirth lately.
Goalie Win Leader
Carey Price with 16 wins in 25 games
Posted by Dirty Dangle at 11:01 AM
Email ThisBlogThis!Share to TwitterShare to FacebookShare to Pinterest