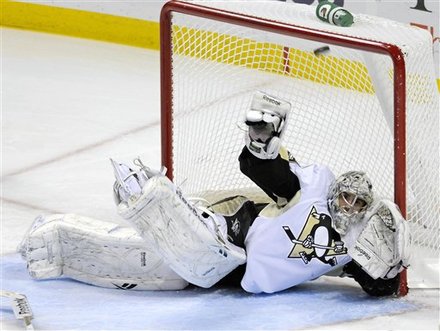 Here are your fantasy players by position for the week:
Ryane Clowe was on fire this week, posting 4 straight multi-point games to lead the league in scoring this week. Clowe is a solid player to have on your team as he is a valuable power forward that plays the left wing, I am actually quite surprised he didn’t get any PIMs this week. Honourable mentions go to Corey Perry and his 5 point night, as well as Sidney Crosby who is still on fire with his 18 game point streak still going strong. Really this honour should have gone to the Unknown player Saturday night who scored 6 goals for 3 different teams. I never thought a Leaf would be the fantasy player of the week, however Tomas Kaberle had a strong enough week to earn himself a spot on it. Posting 5 points this week, including his first goal of the season (also a game winner), Kaberle is shooting a bit more this season so maybe ending this scoring drought will start something for him. Marc-Andre Fleury is playing like he did when the Pens won the cup. With 3 wins this week, and solid stats to boot, Fleury. Honourable mention to Anders Lindback on who is filling admirably for an injured Pekka Rinne (wouldn’t be a bad pick-up either).

Guys to look out for this week
Forwards
Look for Pavel Datsyuk  to have a big Fantasy week. The Red Wings have 4 games against LA, STL, CHI and DAL. Datsyuk is having another strong year with 36 pts in 28 games. In the East only and have 4 games this week. Going to stay away from ’s big boys and go with Ovechkin. It will be interesting to see what type of week he will have after his fight on the weekend.
Forward Leader in Points
Sidney Crosby 51pts in 31 games
Defence
Dustin Byfuglien and the Atlanta Thrashers have 4 games this week against OTT, TB, CAR and NJ. The big Hoss is putting up more points this year on defence then he did last year on forward. In the West you have your choice of Dan Boyle and Nik Lidstrom. Both have 4 games this week and are putting up similar numbers.
Defence Leader in Points
Dustin Byfuglien 30 pts in 30 games
Between the Pipes
This week, I am going to roll with Jimmy Howard. The Red Wings have lost the last 3 games and I don't expect that trend to continue. In the East I am going to take a chance on Ondrej Pavelec of the Atlanta Thrashers and hope that in their 4 games this week he can grab at least 2 wins. Pavelec is 2nd in the NHL with a goals against average of 1.79.
Goalie Leader in Wins
Carey Price 17 Wins
Goalie Leader in Shutouts
Tim Thomas and Henrik Lundqvist are tied with 5 shutouts
Posted by Dirty Dangle at 11:12 AM
Email ThisBlogThis!Share to TwitterShare to FacebookShare to Pinterest