Every Monday we will reveal our fantasy players for the past week, as well as our players to watch in the upcoming week for various types of pools 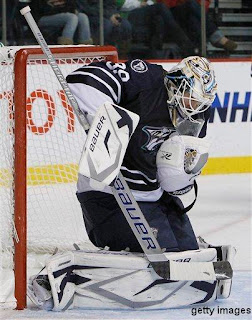 Here are your fantasy players by position for the past week:

Matt Duchene had a big week posting 7 points with the help of new Avs addition Tomas Fleischmann, who also netted the same amount. It is worth noting that Duchene could be playing in the World Juniors this year. Honourable mention goes to Eric Staal who potted 4 goals on 19 shots, and Jonathan Toews who had 6 points this week. Drew Doughty appears to be heating up this year (finally), as he posted 6 points this week to lead all defence in that category. Honourable mention goes to Nik Lidstrom who posted his first career hat trick. Not much can be said for Anders Lindback, this guy came out of nowhere and is playing like Pekka Rinne. Despite getting pulled early on Saturday, Lindback posted 3 wins including a shutout this week to take the goalie honours. Honourable mention goes to Craig Anderson who despite a horrible GAA of 3.71 this week, still managed to grab 4 wins.
Guys to look out for this week
Forwards
In the West I am going to take Henrik Sedin and the Canucks who have 4 games. Captain Canuck has 37 pts in 30 games so far this year. In the East it’s a no brainer to go with the hottest player in the NHL, Sidney Crosby has 4 games this week against , WSH, OTT. Look for him to have a big game against the Caps.
Defence

Dustin Byfuglien has 4 games this week against TOR, STL, BOS, TB. Look for the big Hoss to have a big week. So far this year he has 33 pts in 34 games. In the West I am going with Drew Doughty. He has started off slow this year, but was on fire last week. Look for this trend to continue


Between the Pipes
In the West I am going to go with Roberto Luongo. He was on fire last week getting 3 wins and should be guaranteed 3 starts with the Canucks playing 4 games against STL, DET, CBJ and EDM. In the East I plan on riding the Flower, Marc-Andre Fleury. I like him even more after seeing him on HBO 24/7. The Pens have 4 games this week.


Keep an eye out this week for our World Junior Hockey Fantasy Pool...
Posted by Dirty Dangle at 7:18 AM
Email ThisBlogThis!Share to TwitterShare to FacebookShare to Pinterest