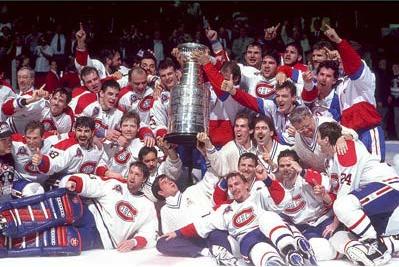 The 1992-1993 NHL Playoffs are one of my favourite of all time. The Toronto Maple Leafs were actually in them and doing well. And I know it’s a sin as a Leaf fan to cheer for the Habs, but I can remember watching most of their games and all of their OT wins. The style of hockey they played that playoffs was so exciting, and they always found some way to win.

The Canadiens won the Stanley Cup that year and set the record for most overtime wins with 10. You need 16 wins in the playoffs to hoist the holy grail of hockey and got 10 of them in overtime. It was amazing to watch the games when they played at home and to see the old Montreal Forum crowd going nuts. It was also the last Stanley Cup final to be played at the old barn. I never did get to see a game at the Forum, but did see a movie at the theatre that is now inside the old building. Guess I will have to pick up some bread and a 12 of Pepsi at the Loblaws that will be inside the old pretty soon (but that's another story).
With Patrick Roy, Vincent Damphousse and Kirk Muller leading the way, the Canadiens cruised through the playoffs with series wins against the Quebec Nordiques 4–2, the Buffalo Sabres 4–0, and the New York Islanders 4–1. In the Finals they would meet (highstick) Gretzky and his Kings. would win 3 overtime games in that series and win the Cup in game 5 at home at the Forum. The Canadiens didn’t play any game 7’s and only one series went to 6 games. But things could have been a lot different if they were not so clutch and they didn’t win all those OT games.

It was a great playoffs (except for the riots after the Cup win) and we're pretty sure that record of 10 consecutive playoff overtime victories will stand for a long time. Sadly, the Canadiens are still the last Canadian team to hoist the Stanley Cup.
Posted by Dirty Dangle at 7:30 AM
Email ThisBlogThis!Share to TwitterShare to FacebookShare to Pinterest