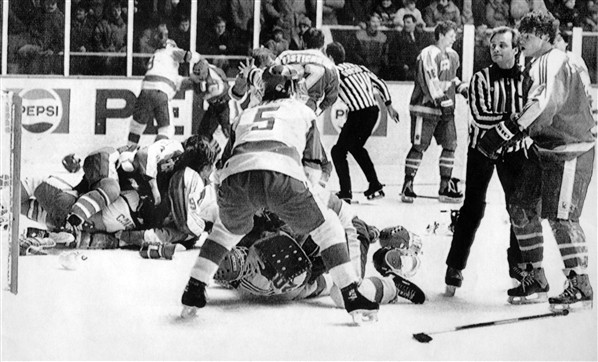 The Punch Up in Piestany


You'd be hard pressed to find someone who talks hockey and doesn't know about this infamous brawl during the 1987 World Junior Hockey Championship. It was a massive bench-clearing brawl in which the officials actually turned the lights off in the arena to try and stop it.

The brawl is so well known, that hockey writer, Gare Joyce, wrote a book on the brawl called When the Lights Went Out. It's a great read and is full of interesting details on the incident, the aftermath and the players involved. Players involved in the fight included Theoren Fleury, Brendan Shanahan, Alexander Mogilny, Sergei Fedorov and Vladimir Konstantinov. You learn that Konstantinov actually broke Greg Hawgood's nose with a headbutt, which Shanahan called "the greatest head butt [he's] ever seen". My favourite part of the book is learning of the distain players had for Pierre Turgeon who sat on the bench while Stephane Roy was getting double-teamed. No wonder they called him the Tin Man.

With Canada in contention to win gold, they were kicked out of the tournament along with the Russians. This caused a storm of controversy with the International Ice Hockey Federation over their decision to boot Canada who were in medal contention, while the Russians (who many believe started the brawl) were already going home off the podium.
The brawl brought popularity to the World Juniors, with Canadians rallying behind the players involved and Don Cherry publicly defending the Canadians. Toronto Maple Leafs owner Harold Ballard even gave the team his own gold medals. In 1987, only one Canadian reporter flew overseas to cover the tournament. In 2005, there were over 100 Canadian reporters covering the tournament in Grand Forks, North Dakota. The tournaments prestige grew with this incident, and is now one of the most sought after achievements for hockey players growing up.

Posted by Dirty Dangle at 7:02 AM
Email ThisBlogThis!Share to TwitterShare to FacebookShare to Pinterest