HBO's 24/7 Penguins/Capitals: Road to the NHL Winter Classic airs Wednesdays at 10pm on HBO. Dirty Dangle will review each of the four episodes in the mini series. 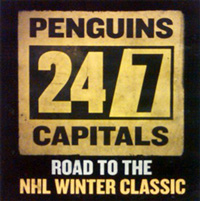 Kudos to the NHL for doing this. Going behind the scenes and following NHL teams like this should have been done years ago, but at least they're on it now. Ever since I first saw Brian Bellows get chirped by Bryan Trottier and Kevin Stevens I've wanted to see more microphones on players. Occasionally you get the odd player caught on mic by a colour commentator between the benches, but that's only a tease. HBO 24/7 goes beyond this, and into the dressing room and players personal lives with all-access. Enjoy it in all its glory, we know we will.

If you haven't seen the episode yet, you should probably stop reading.

After watching the first episode, I grabbed a bar of soap and washed my mouth out (Irish Spring tastes like shit by the way). I was warned though, the disclaimer at the beginning said it would contain Adult Language, although it should have said Hockey Language. It only took 1 minute into the introduction for Bruce F***ing Boudreau to drop an F bomb. The episode's plot couldn't have been more perfect: one team flying high while another one struggles to find goals.


Here are some highlights and things we noticed from Part One of HBO's 24/7 Penguins/Capitals: Road to the NHL Winter Classic:
Posted by Dirty Dangle at 6:41 AM
Email ThisBlogThis!Share to TwitterShare to FacebookShare to Pinterest