Why We Love the World Junior Tourney 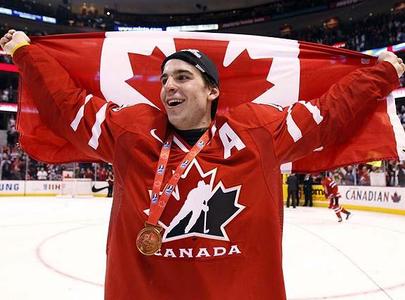 It’s that time of year. The Christmas tree is up and I have been rearranging the gifts under it to make it look like there are even more gifts. The fridge is stocked with Christmas Coke (you know the ones with Santa on them) and my Dad is stocking up on rum to get him through the holidays. Oh ya, and there is that little hockey tournament that will be starting up on Boxing Day.
The World Junior Hockey Championship has been a huge part of my holiday traditions. From getting to watch the games with friends who are back in town from school, traveling, making babies or whatever they do; to little things like how a glass of cold pop at 10am hits the spot when the World Juniors are played overseas and all the games are shown live at a time that is way to early to be up at during the holidays. Another tradition is getting your boys together for some boot hockey after the game and trying to play with the same passion as the World Junior kids. It always ends up with someone getting hurt; either a pulled hammy or a highstick to the brow.
Here are a few more things that we love about the World Junior Hockey Tournament:
Check out the Dirty Dangle World Junior Fantasy Hockey Pool.

Sign up your team today.
Posted by Dirty Dangle at 7:55 AM
Email ThisBlogThis!Share to TwitterShare to FacebookShare to Pinterest