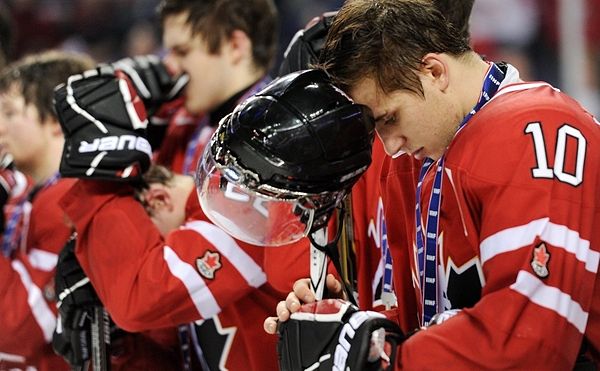 Ok, so Canada lost and we all were pissed and upset when it happened. Now, I gotta say I feel fine. It was a tournament that is so over hyped in Canada and played by 18 and 19 yr old kids. It's not that big around the rest of the world and most countries only show interest in it when then win.

At work today I heard some kids talking about how Canada sucks now... It made me think a little

Canada has made it to the final the last 10 years. Yes, the last 10 years, Canada has had the chance to win gold. They've won 5 consecutive gold medals in those 10 years. Is this tournament too easy?
I think it's good Canada has lost the last 2 years. It gives the tournament more creditability and shows that other teams are just as strong. We don't want this tournament to be like women's hockey and just have USA and Canada in the finals every year. We love the World Juniors and want to see it competitive.
After seeing Sweden beat Canada this year, it's nice to see that nation stepping up. Finland is up there also, almost beating the USA in the preliminary round and blowing a 3-1 lead to Russia with 4 minutes left in the quarterfinals. With Russia and the USA, there are 5 solid nations that could win the tournament at any given time. The Swiss have also improved a lot over the last few years and have shown they are a team that can win some games over a top nation.

Winning is great. But winning tastes a lot better when you know how losing feels.


Here Are the Good and the Ugly from the 2011 World Junior Hockey Championships:
The Good
The Ugly
Posted by Dirty Dangle at 5:40 AM
Email ThisBlogThis!Share to TwitterShare to FacebookShare to Pinterest