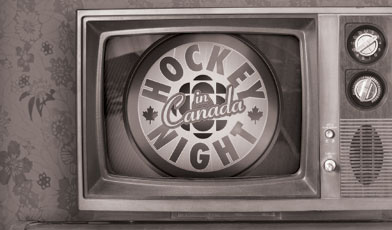 Hockey Night in Canada is a huge part of my life and my childhood. From watching the games as a kid with my Dad to now having a few pops with my brothers and friends while we watch. I used to dream of making the NHL, and how my first game would be on a Saturday night in Toronto for Hockey Night in Canada and I would get interviewed at intermission. I would have been the new hot rookie and gotten to say hello to my family and thank my old coaches. Yup, just a dream.

I have seen a few articles in the past saying certain broadcasters had to be fired or that HNIC should just be changed to Hockey Night in Toronto because they're heavy on the Leafs. Here is an article by Jeff Mackie, who writes for Sympatico Sports. It's called Hockey Night In Canada is a Fading Icon.

“The Hockey Night in Canada brand is suffering. TSN, in my opinion, presents hockey in a much more colourful and compelling way. Whereas CBC’s coverage is becoming tired and stale, TSN is lively and engaging. The personalities are both insightful and entertaining. The TSN panel, in turn, has become required viewing for serious hockey fans”

I like TSN, and yes they do have a few games a week with flashy commentators, but HNIC will always be my favourite hockey program.

Mackie also discusses the chance that there will be no HNIC after the 2013-14 season:


“Now, we’re finding out Hockey Night in Canada may cease to exist if Rogers Communications buys control of Maple Leaf Sports and Entertainment. As first reported in The Toronto Star, Rogers is making a play for control of MLSE. A subsequent report in The Star quotes a handful of industry insiders who believe Rogers will attempt to dominate the hockey broadcasting landscape in Canada, and that could spell the end of Hockey Night in Canada. CBC has hockey rights until the end of the 2013-14 season. There was a national outcry when the network nearly parted ways with Ron MacLean, and another when CBC chose not to retain the rights to the HNIC song.”

I can’t see this happening. I don’t think would let it happen and I don’t even know if the would even let it happen.

What do you think Dirty Dangle readers? Is Hockey Night in Canada slipping?

What do you like about it, or would you want to see changed?
Posted by Dirty Dangle at 7:45 AM
Email ThisBlogThis!Share to TwitterShare to FacebookShare to Pinterest