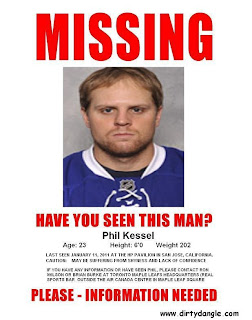 Dirty Dangle would first like to say to all the haters out there - we are Toronto Maple Leaf fans. We would love for Phil Kessel to score 40 goals every year and help lead the team to the playoffs.

Ok, now with that out of the way.
The Phil Kessel missing posters turned up at the ACC during the Leafs overtime loss to the New Jersey Devils this week and was a featured post on Yahoo’s Puck Daddy. We have no idea how they ended up there, sometimes things just appear.
The first ever "Phil Kessel Missing Poster" was made last season when I was at university - when Kessel was in a scoring slump that saw him score 1 goal in 15 games. Since that time, it's been updated and posted whenever Kessel is having trouble finding the net for extended periods of time.

We have had some people pretty ticked off at us and posting comments and even sending us emails saying we are way too hard on Kessel. I even got a text message from my best friend out in Newfoundland telling me that we should give Kessel a break. It's not like we tossed waffles at him.

I could go on all day about how I don’t like the way Phil Kessel plays. He reminds me of that kid who would cherry pick all the time and score a lot of goals, but then have everyone yell “goal suck” at him whenever he touched the puck.
He doesn’t win any board battles and rarely back checks. He is just a one dimensional player that is being paid a lot of money to score goals, and not just score a goal in a 5-2 loss. He is paid to score game winning goals and to find the net when the Leafs really need him. Is he doing that?

You won’t find me wearing a Phil Kessel jersey anytime soon, but as a Toronto Maple Leaf fan I hope that Kessel scores tonight and gets out of this horrendous scoring slump. As for the posters, it's not like someone dumped them out of an airplane and scattered them across the city - yet...

Coming up next for Dirty Dangle:

Posted by Dirty Dangle at 4:32 PM
Email ThisBlogThis!Share to TwitterShare to FacebookShare to Pinterest