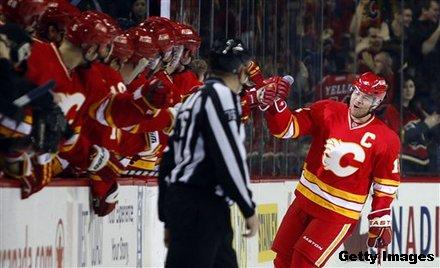 Some very big fantasy stats for players this week as teams make their push for the playoffs. With the gas pedal constantly down for these teams, look for players in tight playoff races to give your team extra scoring and clutch goaltending. Yes, we are aware this includes almost half of the league.


Fantasy Players of the Week by Position
C - Jonathan Toews (CHI)
Toews racked up 5 goals and 2 assists this week and now has a 5 game goal streak, as well as a 9 game point streak. The 9 game point streak is his longest since he opened his career with a 10 game point streak. Toews is doing a lot of his scoring at even strength recently, making him a +9 in his last 9 games. Look for him to continue to lead the Hawks playoff push.
LW - Ilya Kovalchuk (NJ)
Kovalchuk and the NJuggernaut continue to roll as they both turn their seasons around. Ilya had 3 goals and 2 assists for the Devils this week, giving him a least one point in 15 of his last 16 games. A chilly -30 through his first 40 games, Kovalchuk has been a +13 since. Kovalchuk is certainly helping the Devils win as he has 7 winning goals in their last 13 games (shootout included), and is tied for game winners with Alex Ovechkin at 9. Oh yeah, the Devils are 20-2-2 in their last 24 games.
RW - Jarome Iginla (CGY)
Iggy finished the week with 5 goals and 3 assists - the most out of all forwards. Iginla also notched his 30th goal, making this his 10th straight season with 30 or more goals - only the 10th person in NHL history to do so. Iginla has been hot these past few weeks, and red hot Flames have fed off their captains play as they are now sitting 5th in the roller coaster Western Conference.
D - Andrej Sekera (BUF)
He is only owned by 4% of Yahoo! fantasy hockey users, but Sekera put up 1 goal and 7 assists this week, tying Iginla for the most points this week. After being a healthy scratch, Sekera has come back with 5 straight multi-point games after going pointless in 19 games. If your league is deep enough, why not take a chance?
D - Lubomir Visnovsky (ANA)
Visnovsky picked up his 2nd career hat trick this week in an overtime win against the Dallas Stars. It was the first hat trick by a defenceman in the Ducks history and Anaheim could certainly use more of that offence as they sit 2 points out of the log jammed West. Visnovsky sits 3rd in defensive scoring this year with 51 points, and 3 points off league leaders Keith Yandle and Nicklas Lidstrom.
G - Carey Price (MTL)
Jesus Price had a remarkable stat line this week - 3 wins, 1.00 GAA, .974SV% and 1 shutout. Price stopped 113 of 116 shots this week to help give the Canadiens some breathing room from recent Eastern Conference playoff pushers. Price is now tied with Tim Thomas and Miikka Kiprusoff for the league lead in wins with 31 as he continues to put up career high numbers.
Players to Watch This Week
Forwards
In the West, going to ride Jonathan Toews and his Hawks. Toews is one of the hottest players in the league right now and the Hawks will play 3 times this week in which he should continue his strong offensive play. In the East, we can see Stamkos having a big week to claw away at Daniel Sedin's 3 point scoring lead. Tampa has 4 games against WSH, CHI, OTT, and FLA so Stamkos should break the 80 point barrier this week.
Defence
Going to go with the fantasy defenceman god that is Nicklas Lidstrom. The Red Wings have 3 games this week against LA, EDM, and STL and Lidstrom will want to help his team bounce back from that 3rd period collapse against the Coyotes on Saturday night. In the East, I'm going to gamble on Tyler Myers of the Sabres. Buffalo has 4 games this week and with every game a must-win, we can see the big guy having a great fantasy week.
Goalies
In the West, Dallas has four games this week and are fighting for a playoff spot so we're going to go with Kari Lehtonen and hope he plays all four games as the Stars ride him the rest of the way. In the East, you have to go with Ryan Miller and the surging Sabres who play PITT, BOS, TOR and OTT this week.
Some interesting stats from the past week:
Posted by Dirty Dangle at 12:30 PM
Email ThisBlogThis!Share to TwitterShare to FacebookShare to Pinterest