NHL Needs To Do More Than Softer Pads on Stanchions 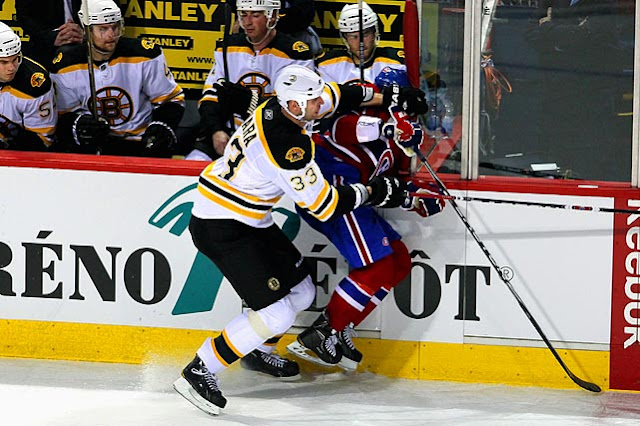 The aftermath of the Zdeno Chara-Max Pacioretty hit resulted in many suggestions for improving the safety of NHL arenas - as well as the word 'stanchion' becoming one of the most used words on social networking and media sites. Many teams added more padding to their stanchions, or have vowed to look at ideas to reduce the risk of injuries to players. However, no matter how many designs hockey bloggers and Don Cherry draw up or how much padding NHL teams add - players will still be suffering injuries if they get hit or collide into the four stanchions that make up the players benches.

The NHL is faster than ever before. The players can just fly out there on the ice, and throw in the fact that they are bigger than ever and you're bound to have injuries. Don Cherry always said in his Rock'Em Sock'Em movies that the best thing about hockey is that you can't run out of bounds. No matter how much padding you add, or how much you angle the stanchions; there will still be injuries just from the size and speed of the players hitting them. Granted, the injuries will probably be less severe, but severity of an injury is something you cannot predict. The thing is, the NHL doesn't have to look for any solutions, as they already have their answer at Joe Louis Arena in Detroit.

As you can see, the stanchion is pushed back a foot from the ice surface and closer to the back of the bench. It's almost ironic that the rink with the worst boards/glass has the best solution to reducing players being hit or colliding into the stanchions that separate the players benches. This design eliminates 2 stanchions which could be a point of contact for an incoming player; down from the original four which most rinks have. It's so simple, and Hockeytown already has it. You could even push this design back a foot more, and make it known to players that any stick swinging or attempting to cross through this area is an automatic suspension that is severe enough to deter that thought. What do you think of this design? Would it have prevented Max Pacioretty from serious injury? 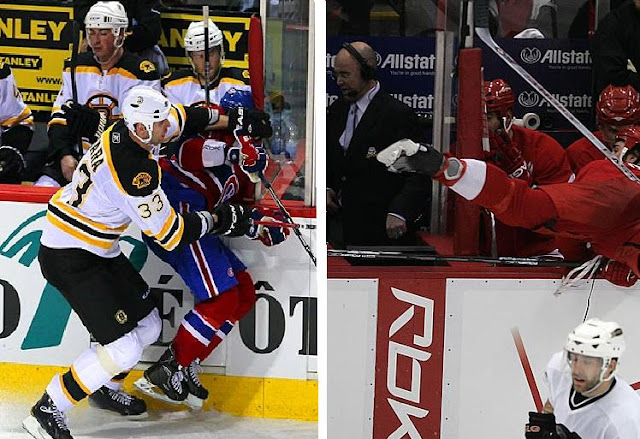 Posted by Dirty Dangle at 6:38 PM
Email ThisBlogThis!Share to TwitterShare to FacebookShare to Pinterest