Rules For Tweeting at a Hockey Game 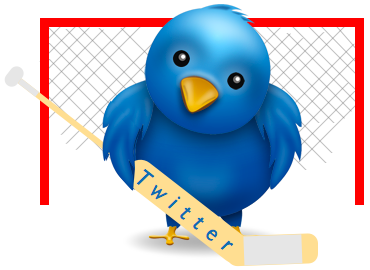 Recently while attending a Toronto Maple Leafs game, we couldn't help but notice the number of cell phones being used in front of us. Even during play, there would be fans hammering away on their Blackberrys - money well spent on a Leafs ticket if you ask us. From our view, a majority of the fans who were glued to their phones were tweeting away - that little blue bird is just so eye catching. We agreed that one of these fans deserved to get hit with a puck, but then we thought, maybe they're delivering some important information? But then again, they probably weren't. So we thought up some rules for tweeting at a hockey game (remember under 140 characters!):
DO TWEET: If you see something interesting happen among the fans
Example: A guy in a Flyers jersey just poured beer on a baby and spit on a pregnant woman!

DON'T TWEET: If you notice something out of place at the arena
Example: Lots of Quebec Nordiques jerseys at Nassau tonight… What the hell is a Nordique?

DO TWEET: If you notice the goalie doing something during the commercial break
Example: Giggy is stretching out his groin at the Leafs bench. Doesn't look good, he might be coming out of the game.

DON'T TWEET: About the clothes you are wearing at the game
Example: At the Leafs game and the guy behind me just spilt beer on my Armani suit

DO TWEET: About the fan demographic
Example: It seems like there are more Blackhawks Jerseys in the stands than Leafs. How do you spell bandwagon again?

DO TWEET: If the hot blonde in front of you has a nice tramp stamp
Example: Is it bad that when we score I'm more excited about seeing the tat on the girl in front of me instead of the goal?

DON'T TWEET: About your seats, nobody cares about your daddy's connections
Example: Yeaaah 3 rows back from the Leafs bench...that's how I roll

DO TWEET: If the intermission entertainment is hilarious
Example: During the goalie races the red goalie just two handed the green goalie's helmet off!

DON'T TWEET: About the lines in the washroom at intermission (just stay off your phone in there)
Example: Does everyone in the arena have to pee right now?

DO TWEET: When you are drunk. It's just funny
Example: I hav so mcuh respect for the way Matt Cookie plays

DON'T TWEET: About how much a rip off the ACC is. Everyone already knows that
Example: I just paid 12 bucks for a beer...FML

DO TWEET: After a goal if you see something that television audiences might have missed
Example: Looks like Ovechkin is talking to the ref trying to get a 2nd assist on that goal.

DON'T TWEET: After a goal letting everyone know the score and who scored
Example: Sharks up 2-1. Goal by Marleau.

DO TWEET: After the game if you notice a player do something that is eye catching
Example: Chris Pronger just stole the puck, the back up goalies mask, and grabbed as many sticks as he could!


Enjoy the game, stay off your phone. But if you can't resist, please tweet responsibly.

Things You Notice at a Live NHL Game

Observations From the GM Meetings

How the NHL Lockout Will Affect Hockey Fans
Posted by Dirty Dangle at 12:51 AM
Email ThisBlogThis!Share to TwitterShare to FacebookShare to Pinterest