Hockey players have long been collected and traded on cardboard by hockey fans, and even more recently - celebrity hockey fans - have been printed in hockey card sets. Now it's time for regular hockey fans to be cardboarded as well with their very own Dirty Dangle Fans of the Game hockey card honouring those fans who have really showed their passion this past year! 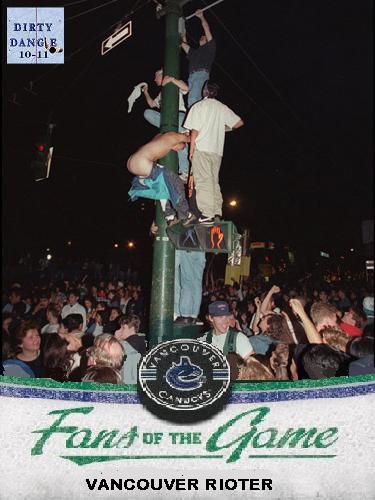 The Vancouver Rioter Fans of the Game Hockey Card is a classic gem from 1994. After a Game Seven Stanley Cup Final defeat by Mark Messier and the New York Rangers, thousands of Canucks fans took to the streets of Vancouver. An estimated 50,000 to 75,000 fans swarmed the streets, especially at the corner of Robson and Thurlow. Initially an upbeat gathering, mob mentality and alcohol took over with fights and mosh pits becoming the norm. Fans climbed on top of stores, street signs, and even tried to tightrope walk on the hydro wires above the streets. With that said, we also give you the limited edition Cirque Du Stupide Fans of the Game Hockey Card: 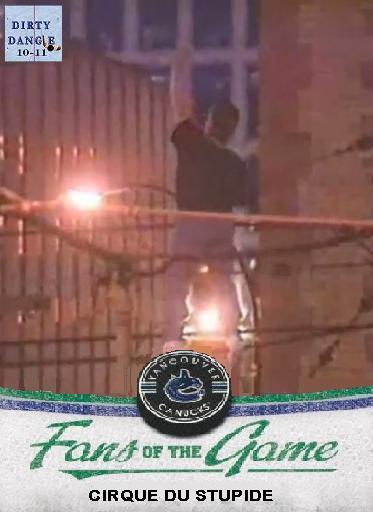 We tried to make this card into a retro hologram one to show him high-walking, but that technology is still in the 1990s.

The Boob Flasher
Posted by Dirty Dangle at 1:21 PM
Email ThisBlogThis!Share to TwitterShare to FacebookShare to Pinterest