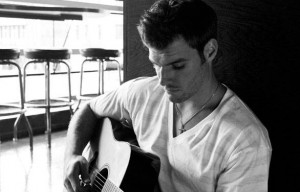 I know I'm a little late getting to this as he released his album months ago, but I only recently thought of Matt Lashoff's name as it was being tossed around with the Toronto Maple Leafs training camp starting this weekend. Apparently Lashoff is musically gifted so I decided to check out his debut album "Living on Heart" tha dropped a few months ago. Better late than never right?

From the tracks I could see on YouTube and also the 40 second samplers you can listen to on his website site http://www.lashoff.com/. I was pretty surprised that it didn't sound that bad and was even more surprised that the tracks actually played on my crappy work computer.

Lashoff has a John Mayer-pop rock sound going on and if being a pro hockey player wasn't getting him laid enough he can just whip out his guitar to win over some hearts. Some guys really do have it all. When I listened to "Branch Ave" I was instantly taken back to my days of backpacking in Australia and listening to Pete Murray who was a god over there at that time. "Before You Accuse Me" is an Eric Clapton cover - it takes balls to try and cover Clapton.

Lashoff comes from a musical family and always been into playing and singing. When he was playing in Providence with the Bruins farm team he says he use to jam with ex-Maple Leaf prospect Tuukka Rask, who is an avid drummer. Lashoff also says that Luke Schenn has some talent and he has been trying to get him into playing more and having some jam sessions. Luke Schenn could even write a ballad about his summer-long contract negotiation.

I played some of his songs for the girls at work without telling them who it was. One of them right away thought it was John Mayer. The other wouldn't say if the music was good or not until she saw a picture of him - Lashoff passed the physical appearance test with flying colours. My two co-workers are now showing interest in going to a few Marlies games this season.

Lashoff was drafted 22nd overall in the 2005 NHL Entry Draft and is still trying to prove that he can be an everyday NHL player. At the moment Lashoff is 7th or 8th on the Leafs depth chart on the backend and it looks like he will be starting the season in the AHL come October. He posted up some solid stats last year with 7 goals and 28 points in 69 games for the Marlies. He also tossed in a team leading 137 PIMS, which makes me even more impressed that he can play guitar so well with those smashed up knuckles.

Posted by Dirty Dangle at 11:09 AM
Email ThisBlogThis!Share to TwitterShare to FacebookShare to Pinterest