Mike Modano Calls It A Career 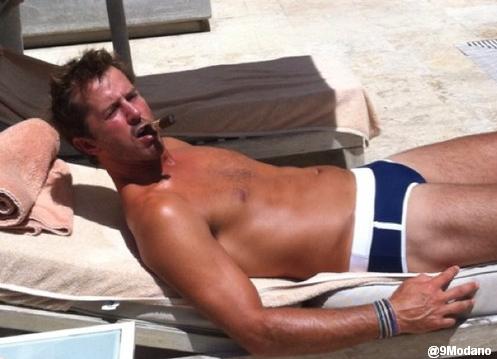 Earlier today, Mike Modano caught many hockey fans off guard - as the 41 year old used Twitter. Modano tweeted a link to an announcement about his hockey playing future. While we were surprised that Modanosaur had Twitter, we were even more surprised that he had Facebook, which was the forum in which he announced his retirement from the NHL.

Modano was drafted 1st overall at the 1988 NHL Entry Draft by the Minnesota North Stars, becoming the 2nd American-born player to be drafted at the position after Brian Lawton who was also drafted by the North Stars. Modano wouldn't be a bust like Lawton however, and would controversially lose the Calder Trophy to a 31-year-old Sergei Makarov who had already played professionally in the Soviet Union (this led to the 26-year-old age limit). Modano would have a successful and consistent hockey career in which he was a 7 time All-Star, as well as a 3 time Olympian.

Modano maintained his youth through marrying former musician/actor, Willa Ford, also known as Mandy Modano. I think she had a hit song when I was in Grade Seven that was pretty dirty and gained a lot of male fans for photos like this, and this, and this. Congrats on a great career Mike, your slick moves and hockey hair will be missed.


This is semi-sad news for the NHL as the last active player from the 1980's has officially called it a career (although Mark Recchi played the latest game). With the old jokes aside, Modano was a legend, and will go down as the all-time goal scoring and points leader among American-born NHLers.
Posted by Dirty Dangle at 1:49 PM
Email ThisBlogThis!Share to TwitterShare to FacebookShare to Pinterest