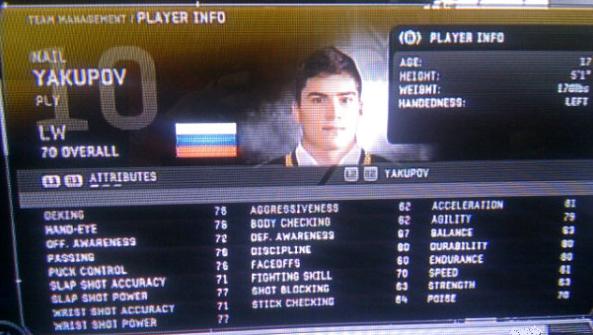 First off, having the first name Nail makes you pretty bad ass. Unfortunately for Yakupov though he is not as feared by the video game makers at EA Sports as they made him only 5"1 in NHL 12. He is currently listed on most sites at 5"10 or 5"11. I'm sure they'll fix this as Yakupov is an elite prospect that should be the top choice in next year's NHL Entry Draft.

Nail Yakupov was drafted 2nd overall in the CHL Import Draft in 2010 by the Sarina Sting and he didn't disappoint. He won Rookie of the Year for the whole Canadian Hockey League by putting up 49 goals and 101 points in 65 games. Yakupov also broke the Sting's rookie goal scoring record formerly held by Steven Stamkos. Yakupov is a flashy player, but he doesn't shy away from the rough stuff and one of the reasons he chose to come to Canada was for its tough, physical brand of hockey.

So far to start the 2011-12 season Yakupov has been on fire putting up 25 points in the first 10 games. He is currently on pace for 48 goals, 122 assists and 170 points and has done all this without his linemate and roommate, Alex Galchenyuk, who has been injured. Galechenyuk is another top prospect that should be a top pick in June. They are a deadly combo together, which makes it even more shocking that Yakupov is playing so well without him.

It's going to be fun watching Yakupov at the World Juniors this year. If we weren't already looking forward to the Russia vs Canada game, having Yakupov in the game will just add more excitement. Until then, enjoy the Nail Yakupov Show.

Posted by Dirty Dangle at 1:28 PM
Email ThisBlogThis!Share to TwitterShare to FacebookShare to Pinterest