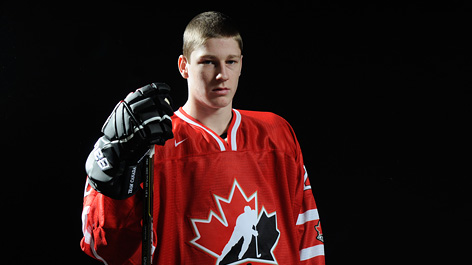 Nathan MacKinnon turned 16 on September 1st, so he is still a young prospect, but many scouts already have him pegged to be the top draft choice in the 2013 NHL Entry Draft. For years he has been compared to Sidney Crosby and you can see their similarities on and off the ice.

Nathan and Sid both play centre. They both attended Shattuck-St. Mary's prep school in Minnesota and they were both the number one pick of the QMJHL midget draft. Toss in that they are both Cole Harbour, Nova Scotia boys and the similarities get scary (must be something in the water there). Crosby's agent, Pat Brisson, must also see a bright future with MacKinnon as he is his advisor at the moment.

MacKinnon currently plays for the Halifax Mooseheads, despite being drafted by the Baie-Comeau Drakkar. No, he didn't pull an Eric Lindros and refuse to play for the Drakkar (who wouldn't want to play for the Viking Ships?), but education was a problem. MacKinnon doesn't speak French, and there are no English schools in the Baie-Comeau area so a trade with Halifax was made. The Mooseheads gave up a lot for MacKinnon - Carl Gelinas (they're team MVP), Francis Turbide, and their first round picks in 2012, 2013, and 2014.

So how is MacKinnon doing in his first season with the Halifax Mooseheads? He currently sits 9th in league scoring with 7 goals and 24 points through 15 games. He won't touch Crosby's "Q" numbers as a 16 year old, but the talent in MacKinnon is very much there. MacKinnon probably won't follow in Crosby's skates of playing for Canada at the World Juniors as a 16 year old, but he is definitely receiving a great deal of attention as one of the top rookies in the Canadian Hockey League.

Posted by Dirty Dangle at 4:04 PM
Email ThisBlogThis!Share to TwitterShare to FacebookShare to Pinterest