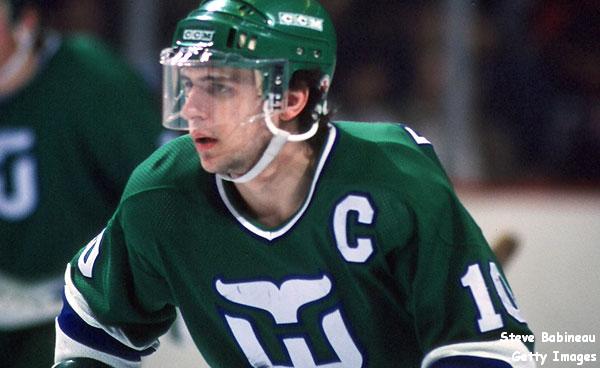 This week’s return is number 2 all-time in assists with 1249 and 4th all-time in points with 1798. I am of course talking about Ron Francis. This guy is the definition of underrated. Being Canadian and being a centre meant that Ron had to live in the shadows of other centres like Gretzky, Messier, Lemieux, Sakic and Hawerchuk. As a result, Ron didn’t get his invites to Team Canada events as often as I believe he should have. Ron did win two Stanley Cups and quietly put together one of the most impressive Hall of Fame resumes in NHL history despite never playing in a Canada Cup.

Even though he wasn’t really known as being a goal scorer, Ron didn’t mind putting them in the net. Francis had scored 20+ goals in a season, 20 times! He finished with 549 career goals which are currently good enough for 26th in NHL history. No wonder he was a shoo-in for the Hockey Hall of Fame in 2007 making it in his first year of eligibility.

Despite never receiving the same respect as other players, Ron never had a chip on his shoulder and would just go out and give it his all. Like I mentioned in the Joe Sakic post, Ron Francis is another player who I always felt was one of the leagues classiest. This certainly endeared him to many fans and he was and always will be remembered as a Whaler/Cane in my mind. I could go on and on about Ron but I think many of you can easily quote stats and memories as well as I could so here are the cards!

First off, his rookie card is from the 82-83 OPC set. This was the ONLY set released that year so there is only one Ron Francis rookie out there. 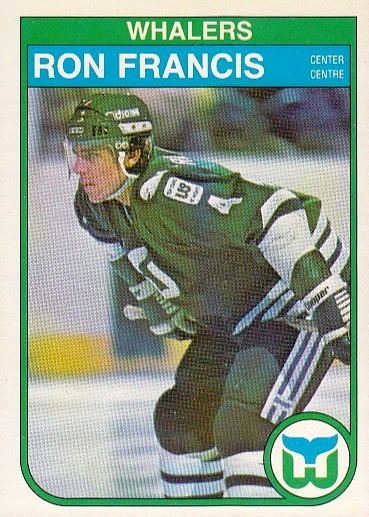 The set is a little mass produced for its era as only OPC made cards that year. The value on this card is in the 8 – 20 dollar range. I am pretty lucky to have a few of this in my collection, and it's definitely my favourite Francis card. I didn’t want to chance losing it in a TTM request.

The cards I mailed away were a little more recent. Both are ones that I really remember from my early days of collecting and hoped Ron would sign. 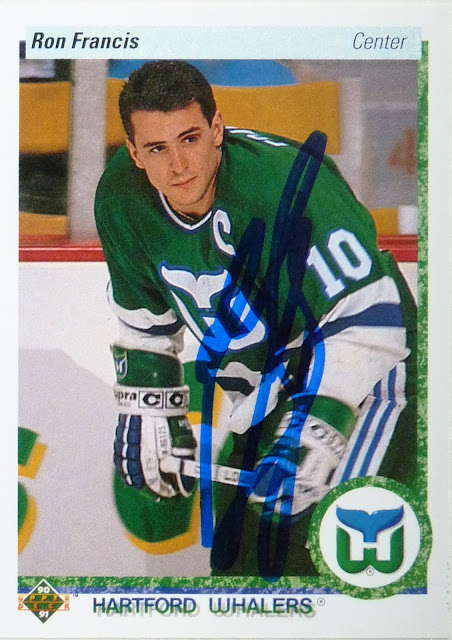 Ron’s autograph is certainly unique. As I pointed out before, I love the 90-91 UD set and picking this card was a no-brainer for me. 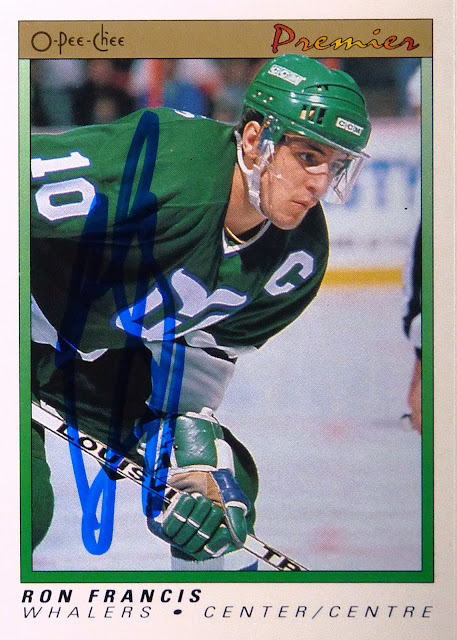 Here is the other card I sent in. I always had a soft spot for this set. Certainly the most "valuable" of the 90-91 sets and I love the simplicity of the card.

So Sam has some good news for me this week with Francis showing up on Monday, here's hoping a few more trickle in later this week!
Posted by Dirty Dangle at 7:35 PM
Email ThisBlogThis!Share to TwitterShare to FacebookShare to Pinterest