What's Kyle Turris Up To These Days? 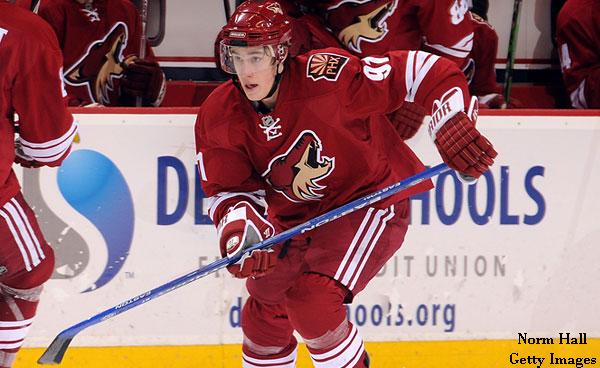 Kyle Turris is just 22 years old, but already wants out of the desert and far away from the Phoenix Coyotes. Turris was drafted 3rd overall by the Coyotes in the 2007 NHL Entry Draft, right behind Patrick Kane and James Van Riemsdyk, who have already signed contract extension coming off their entry level deals.
The problem is that Turris has shown potential, but hasn't produced the numbers to be making close to $4M a season, what he's believed to be seeking. In 131 NHL games, Turris has 19 goals, 27 helpers for 46 points, not the kind of numbers that will be getting you paid $4M. Kurt Overhardt, the agent for Turris says this is not about money, but that they would like a fresh start with a new team.
It is pretty easy to see why somebody would want out of Phoenix with all the ownership problems over the years and the talk of relocation. Toss in the fact that the fans in Phoenix don't come out to watch and playing home games in an half empty rink must remind Turris of his Tier II Junior A days.

If Turris doesn't sign a deal with Phoenix before December 1st he will have to sit out the whole year. Which I am sure he and his agent don't want to do, since at his age this would be a huge year for his development and to prove to everyone why he was the 3rd overall pick.

So what is Kyle Turris up to these days as he awaits a contract or trade? We have some ideas: