Will The Real Alexander Ovechkin Please Stand Up 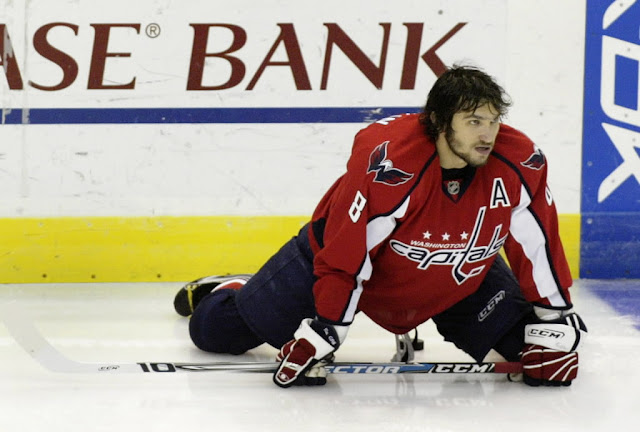 It's early in the season, very early, so I don't want to be getting on a guy right away. But for the 1st time in a long time I had the #1 pick in a fantasy draft and I went with Mr. Ovechkin. This is a league that has shots, PIMs, powerplay goals as stat categories along with the usual goals, assists, points and plus minus. So my thinking was that Ovechkin would bounce back and give me close to 400 shots, 80ish PIMs and lead the league in goals.

Ovechkin is that rare fantasy player that can help you in almost every statistical category. Just looking at his career highs make fantasy GMs drool. I was hoping when I drafted him to get a solid mix of what he has put up the last 4 seasons - basically be the ultimate fantasy hockey player.

But now when I look at his stat page on TSN and see what he is on pace for this year, it kind of hurts my fantasy GM soul. Ovechkin is on pace for good numbers, but they aren't 1st overall fantasy draft numbers. But then again, Phil Kessel is on pace for Gretzky-like numbers so I guess I shouldn't read into statistics for the first two weeks of the season.

Ovechkin so far is a point per game player with 7 points in 7 games and he has scored 3 goals, which is on pace for 35 this season. But the stat that really bugs me so far this year is his shots on goal. So far he is on pace for around 245 shots. That a lot less then his off year of 367 last season.

I just hope I drafted the Ovechkin from 2 seasons ago. Just because he is pimping Mr. Big chocolate bars now doesn't mean he needs to eat them all the time. For me Ovie, please have a salad or something healthy. My fantasy team needs you to stand up.
Posted by Dirty Dangle at 2:52 PM
Email ThisBlogThis!Share to TwitterShare to FacebookShare to Pinterest