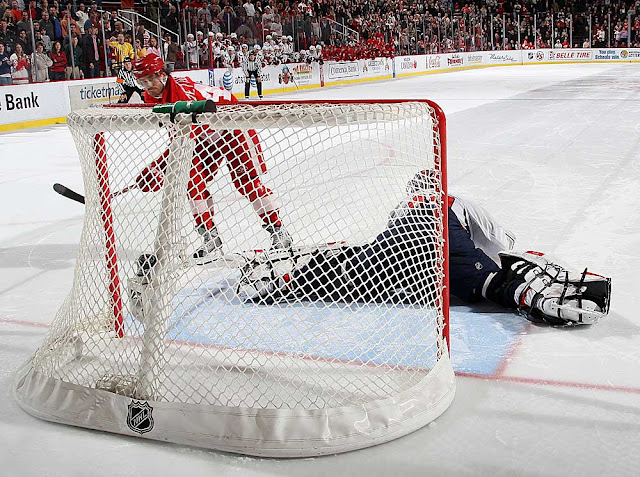 As a Leaf fan, I realized just how hard it is to catch teams you are chasing in the standings when a team can lose a game, but still get a point in overtime or the shootout. Now when I hear of a game going to overtime, I don't think of how exciting the 4-on-4 play will be, but that the game is now a 3-point-game. The worst is when your team loses a tight 1 goal game, and then you see highlights of two teams from your conference head to overtime and know that both teams are pulling ahead of your team in the standings. This really increases your bar tab at the end of the night.

An example of this occurred on Wednesday with 12 of the 15 Eastern Conference teams in action before Thanksgiving Day. With 10 of those teams playing each other, the Eastern Conference standings would look much different the following day. Out of those 12 teams, 11 of them earned a point that night and the only team that missed out on the giving spirit were the New York Rangers. With only the New York Islanders pretty much out of playoff contention, these points are huge for teams in contention with the ability to advance up the standings. But looking back at the last 3 seasons in the NHL, leading the league in Overtime Losses (OTL) is not usually a good thing:


You would think if teams were able to fight and hang in games they would come out with more wins, but only Phoenix was a playoff team and they were swept in the first round. In 2008-09, Tampa Bay was so bad that even if their 18 OTL were turned into wins they still wouldn't have made the playoffs that year.

The 3-point-game can work in your favour if your team has a playoff spot locked. But being a fan of a team that has chased for a playoff spot the last few years can be very frustrating. It will be interesting to see how this season goes and maybe as a Leaf fan I will grow to love the 3 point game when the Leafs play like crap, but still get a point and increase their lead over a team chasing them.

What do you think of the 3 point game?
Posted by Dirty Dangle at 3:05 PM
Email ThisBlogThis!Share to TwitterShare to FacebookShare to Pinterest