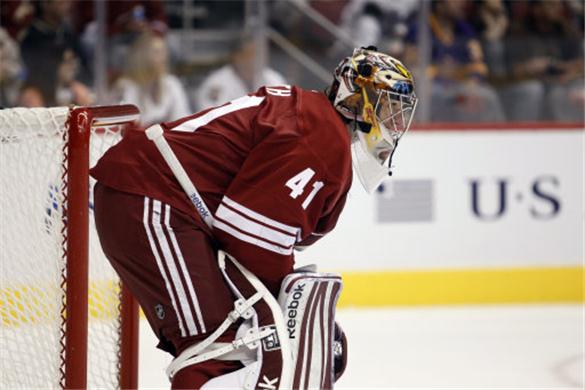 It appears as though Mike Smith has finally become the #1 goalie that Tampa and Dallas thought he could be. Unfortunately for those teams, he is standing on his head these days for the Phoenix Coyotes.

So far this season Smith has been a rock in the desert. In 16 games he has a 10-3-3 record with a sparkling 2.15 GAA and is among the league leaders in save percentage with .935. The surprising Coyotes are near of the top of the Western Conference and Smith's play is one of the main reasons.

The Coyotes are known for being a very stingy defensive team with Dave Tippett behind the bench so you can say the coaching system has helped Smith put up Ilya Bryzgalov numbers so far this year. But right now the Coyotes are looking like they got a great bargain on Smith when they signed him this July for 2 years at $2M a season.

Smith who has battled injuries, and never played in more than 42 games in one season has mostly been known as a solid backup with the abilities to be a number one guy. His career high for games played even in junior was only 53 games. Most number one goalies in the NHL are playing over 60 games a year, so this will be a big test for Smith.

How many of us took a chance on him this year and drafted him in fantasy hockey leagues? I know many people stayed away from drafting goalies from Phoenix because it wasn't a sure bet on who was going to be the number one guy this year with Jason Labarbera also fighting for the #1 spot at the beginning of the year. Smith no doubt became one of the most sought after players on the waiver wire after getting hot in late October.

A little unknown fact about Mike Smith: In first professional hockey game with with the Lexington Men O'War of the ECHL he recorded a shutout and scored a goal. Two months later he would complete the Ron Hextall Hat Trick by getting in a fight during a bench-clearing brawl.

Will Mike Smith keep up his solid play or will the injury bug bite him?
Posted by Dirty Dangle at 6:26 PM
Email ThisBlogThis!Share to TwitterShare to FacebookShare to Pinterest