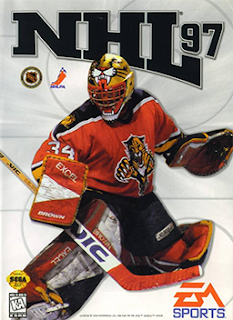 I remember the first time I played this game. My brothers and I had bought it from Zellers and had run home to play it on our Sega Genesis. We were so excited we moved the system onto our big 40" TV at the time. I also remember playing it for Playstation soon after and thinking at the time how brutal it was. The play was choppy, the graphics hurting - the whole thing felt rushed.
NHL 97 had so many new features it was almost overwhelming, similar to the new EA games in which there are so many game modes to choose from. There were international teams, skills competition events, and our favourite addition: special skills for certain players.
The game featured Team Canada, Team USA, Team Russia and Team Europe teams for the first time. It was pretty cool to be able to play with your country and real players for the first time,and redeem that 1996 World Cup of Hockey loss.

The NHL skills competition game mode might have been the most addictive thing in 1996 (other than collecting Pogs) as it featured non-stop challenges with friends. The game featured four events: hardest shot, 2-on-0 with a goalie, accuracy shooting and a fastest skater/agility competition. Ripping slapshots with Al MacInnis was borderline cheating.

Now to the best part - the individual special skills for elite players. There were 15 special skills that reflected the skills of NHL players (well sort of). I don't remember them all, but I do remember there being a behind-the-back shot with Mario Lemieux, being able to skate with the puck and hit at the same time with Eric Lindros (apparently he could skate with his head up in this game), Mike Modano being able to dangle with a special deke, and Dougie Gimour able to drop a pass at the blueline for Larry Murphy (booooooo) to whistle high and wide.

While there was an easy way to score as there is in most NHL series games, it was still a great game that had the "wow factor" at the time. Just watch the gameplay and remember sitting on a beanbag drinking a Jolt Cola at 3am as you pushed deep into the Stanley Cup Playoffs.