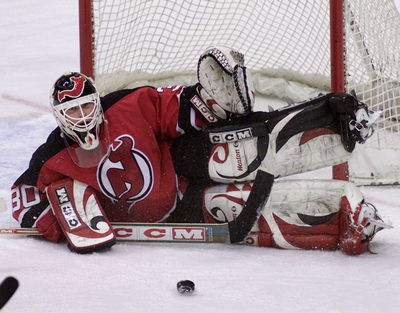 If you are talking the pioneer days I would go with George Hainsworth. His 22 shutouts in a season is a record that will never be broken in my opinion. He even did it in just 44 games! For the 40’s-60’s era, I would go with Terry Sawchuk. Is Sawchuk better than Hainsworth? I honestly don’t believe you can compare the two because they played in two different versions of hockey.

If you are talking modern era, you still need to distinguish between the 70/80s and the game you currently see - which has been pretty similar since the first lockout. If you are talking 70/80’s, I would suggest it is a toss-up between Ken Dryden and Vladislav Tretiak. In the past 25 years it really is between Martin Brodeur, Patrick Roy and Dominik Hasek. They are all excellent goalies; Hasek is a little overrated in my opinion, but certainly belongs in the same sentence as the other two. I am not going to say who I think is the best of those three because I don’t think I honestly know. I certainly like Brodeur the most which I think might cloud my judgment on the basic facts of the matter.

Brodeur is a player I have followed closely since 1990 and it has everything to do with him being a New Jersey Devil. Over the course of his career (as of Nov 22, 2011) he has won 3 Stanley Cups, 624 regular season games (an NHL record) and has also had 116 shutouts (also an NHL record). In addition to stopping the puck, Brodeur can contribute offensively too. I am not talking about the days when Fuhr would make a pad save and kick the puck to Coffey and he would pass to Gretzky for a goal, but rather make quality stretch passes that would end up as goals. In fact, Marty has scored two goals, and has a career total of 39 regular season points which puts him ahead of players like:
The tough thing about being a Brodeur fan, is that he was off the radar of the average fan for most of the early 90’s. When he finally got his due and was winning Vezina trophies, I was still happy to see him get some hardware, but I always felt it was ripped off in the late 90’s because I believe those were certainly his best years.
When the Devils starting winning Cups, everyone would attribute that to the defensemen we had at the time and try to diminish the impact of his play. In 2003 when everyone was getting “Giggy” with it, Brodeur was the goalie who would win 16 games and ultimately the Cup. But the important fact is; 7 of those wins were by SHUTOUT. No matter how good your D is, goals still happen, but the goalie is the one in the end that turns little goals into NO goals. His 1.65 GAA and .935 save percentage are all signs that he was certainly the reason and cause for the Devils winning the Cup in 2003.
The 2010 Olympics were a tough one for Brodeur as he certainly wasn’t sharp against the USA, but if memory serves me right, the team as a WHOLE came out very flat and it was Marty who became the scapegoat for that loss. Ever since then, it seems as if he has become a bit of a pariah and many Canadian hockey fans have given him up for dead.

When it comes to hockey cards there are thousands of cards with Martin Brodeur on them, but only two are considered Rookie Cards. Both are made by Score in 1990-91 and they are available in the American (Score in blue) and Canadian (Score in red) varieties. 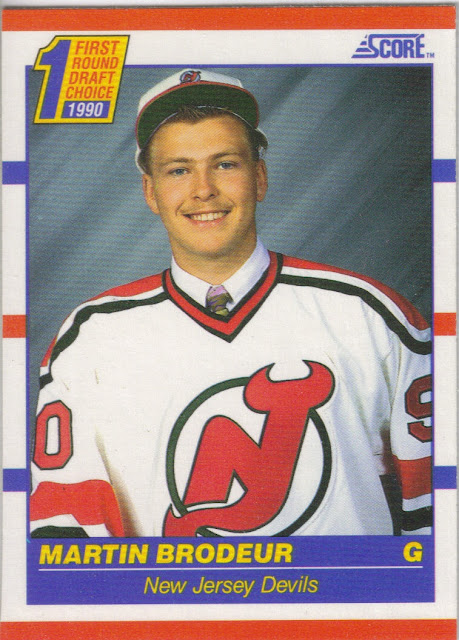 Both are worth about the same and they book for about 15 bucks. The reason why it is worth more than most from this year is because these are the only rookies cards printed with Brodeur on them.
The autograph wasn’t easy to come by and many haven’t had ANY success writing through the mail. I was pretty sure when I mailed it away I was never going to see it again. However, I picked what I thought would be a perfect card for an auto, wrote one of the best letters I have ever sent and hoped for the best. 21 days later, this beauty arrived: 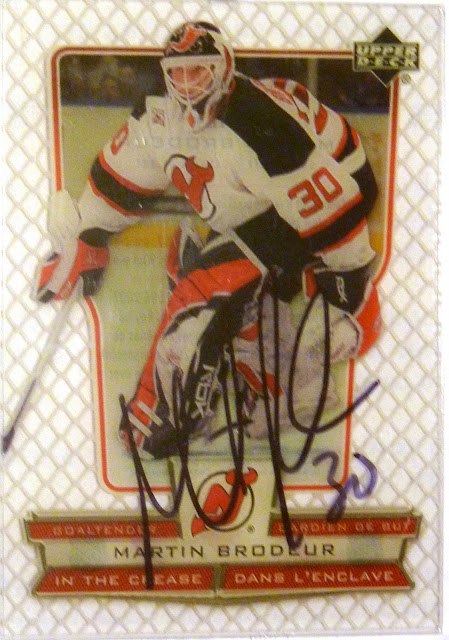 (Card is actually acrylic and is see through, I put a white sheet of paper behind the card to digitize it)
WOW. This could not have turned out any better. The auto looks amazing on the card and the fact that he signed it in just 3 weeks is almost unheard of. I didn’t expect to see it back and sure enough I do and in less than a month. This could be my new favourite return. Not just because of who it is, or how hard it is to get, but all of those combined with how nice it looks.
Marty like our last feature player, Theo Fleury, has a book out as well called Beyond the Crease. A pretty cool book with a section on what happened during the lockout in 2004. I found this section to be one of the more interesting parts and one that any fan can enjoy!