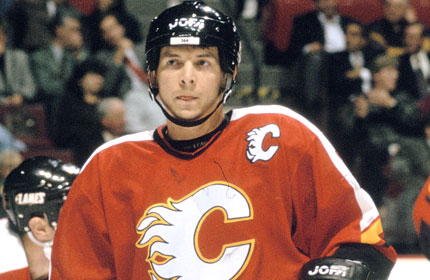 When you hear about celebrities and athletes falling on hard times, it is very easy to get cynical. I think it is difficult sometimes to realize these people we elevate above ourselves are actually as fallible as you and I. The reality is, before they were famous, they were the kids sitting next to us in school or living down the street from us growing up. Theoren Fleury is an example of a person who fell on hard times, but rather than turn into a person who continually makes the same mistakes and blames others, he took control of his life and is fighting the daily fight of sobriety. I certainly will not attempt to summarize his life in this post, if you are interested in his story (and it is a good one), I recommend you pick up Playing With Fire.

My memories of Theoren go right back to when I was first starting to watch hockey and he was a rookie with the Calgary Flames. In his rookie season, he won the Stanley Cup! Not a bad way to start a career, and I am sure guys like Tyler Seguin should take notice, as Fleury would unfortunately never lift another Cup in his career. To say he was a warrior on the ice would be an understatement, I honestly can’t think of many players who fought and played harder than Fleury on the ice and the results speak for themselves. In his career he would score 30 or more 8 times and would average more than 28 goals a season in his 16 NHL seasons. Theoren also finished averaging more than a point a game (and had over 1800 PIM) and I think he belongs in the Hall of Fame. Not just for what he did in the NHL, but also for his terrific International record.

Fleury made his debut for Canada at the World Junior Championship in 1987 and took part in the Punch Up in Piestany which got the Canadians disqualified from the tournament. Fleury would return to the World Juniors in 1988 and shine with 6 goals and 8 points in 7 games earning him a spot on the tournament All-Star team. Fleury also played in the 1991 Canada Cup and was a member of that Championship team, but his biggest international success occurred in 2002 with Olympic Gold.

When I think of Theoren Fleury, I think of two things. His 90-91 UD Card and his famous game 6 overtime goal against the Edmonton Oilers in 1991. 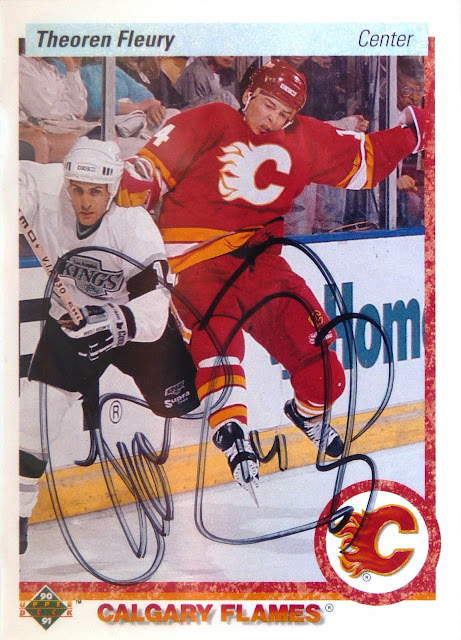 I LOVE this card. Look at the hit Fleury is throwing, this in my mind demonstrates how Fleury played the game and this is just one cool action shot. 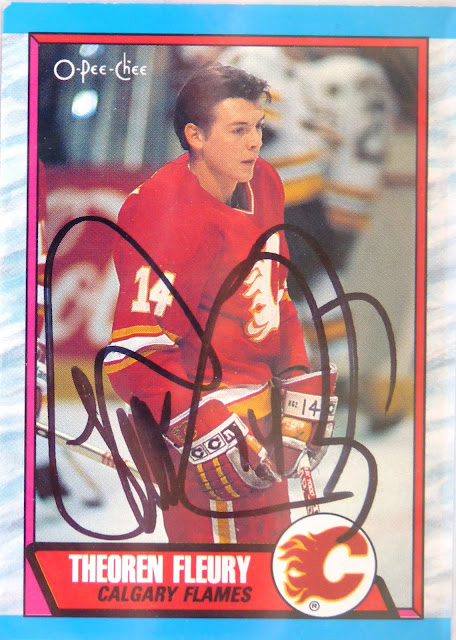 I had to mail this away, in fact when I can, I try and send away rookie cards. This is his ONLY rookie card and it is from the 89-90 OPC set. Not a valuable set as it was severely over produced; the Fleury rookie un-autographed sells from 2 – 5 dollars. This auto is the nicer of the two.

I hope Fleury is able to keep up the good things he is doing these days and he certainly has a fan for life in me!

Next week, I have another member of the 2002 Olympic Men’s hockey team!
Posted by Dirty Dangle at 10:17 AM
Email ThisBlogThis!Share to TwitterShare to FacebookShare to Pinterest