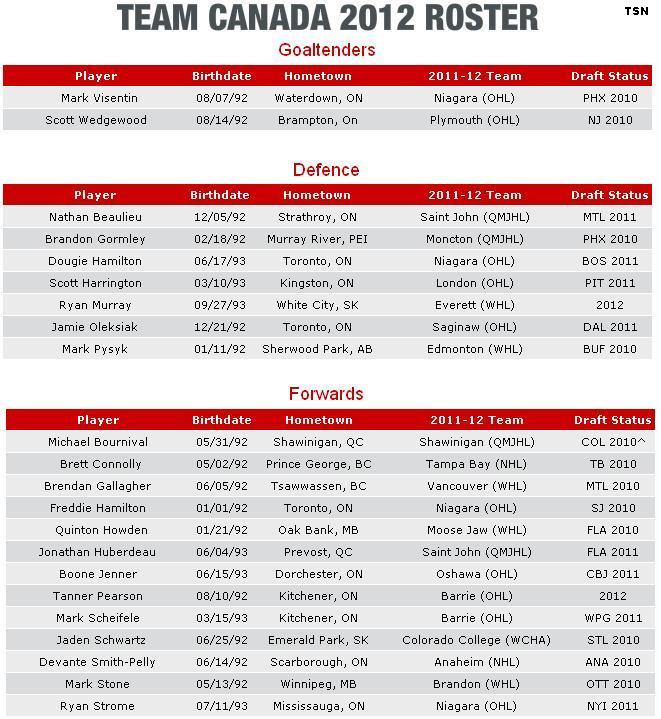 What do you think of this roster?

As always there were some players that didn't make the team and have some hockey fans scratching their heads as to why. Here are three notables:

D, Ryan Murphy
Murphy was drafted 12th overall by the Carolina Hurricanes last June and is a Ryan Ellis clone. He scored 26 goals and had 79 points in 63 games last season with the Kitchener Rangers, but has missed time this year with a concussion and is still shaking the rust off. It would have been a risky move to select him, but if it paid off... oh boy. In the end Canada, went with offensive-minded d-man, Nathan Beaulieu of the QMJHL, who will QB the PP. If Team Canada has trouble with their powerplay during the tournament, you can bet that Murphy's name will be brought up as a guy that could have helped that.

RW, Tyler Toffoli
Toffoli is leading the OHL in goals with 27 in 28 games and 2nd in points with 50. The scouting report on him says he isn't the best skater, but looking at those stats it's hard to believe he didn't make this team. Luc Robitaille and Brett Hull weren't the best skaters, but they could score goals. Toffoili has 87 goals in his last 100 games in the OHL... 87 goals! Canada's RW depth was evident with Brett Connolly and Devante Smith-Pelly being loaned from their NHL clubs, and it looks like Toffoli wouldn't be able to bring the energy needed for a 4th line checking role.

RW, Ty Rattie
Rattie is the Tyler Toffoli of the WHL. He is not only leading the WHL in goals with 32 in 32 games, but the entire Canadian Hockey League! His 32 goals and 59 points put him in 2nd place for WHL scoring behind his competitor for that 3rd line RW spot, Mark Stone, who made the cut. Hard to believe a guy that is scoring a goal a game isn't good enough to wear the red and white this Christmas break, but once again, RW depth and energy are big factors.

Judging by these 3 cuts, it looks like Team Canada doesn’t really care much about how well you do with your junior club (as has been the case in previous years). It's how you look in scrimmages and practices with the team over their short camp - nobody is a walk-on. If Canada is not putting up the goals on the scoreboard, you will see and hear many hockey fans mentioning these 3 players and dropping f-bombs at the bar that they should be playing on the team.
Posted by Dirty Dangle at 3:15 PM
Email ThisBlogThis!Share to TwitterShare to FacebookShare to Pinterest