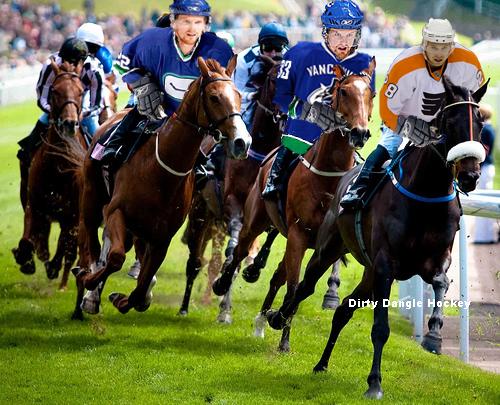 After a slowish start to the season in which we thought they might have switched jerseys, the Sedins are really picking it up now and could both be on top of the scoring race by this time next week. While among the favourites to lead the league, the Sedin's started the season at a point-per-game pace while others pulled ahead at Mario Lemieux-like numbers. But now, the Sedin's are rolling hot and the Canucks look to be the Western Conference juggernaut going 9-0-1 in their last 10.

Henrik and Daniel have always been known as those two twins that put up the points on the West Coast, but there are still some hockey fans that still don't give them the credit they deserve despite back-to-back Art Ross Trophy wins and a Hart Trophy (that we assume they shared). They don't get the Crosby or Ovechkin fan fare, but are two of the top players in the NHL and one of the most exciting duos to watch. East Coast Bias what up!

So far this season through 29 games, Daniel has 34 points and Hank has 33. That puts them 3rd and 4th in league scoring just behind Phil Kessel at 36 points and Claude Giroux who leads the league with 39 points. All four of these players have 3 games this week, but the Sedins are playing the Columbus Blue Jackets who are worst in the Western Conference and NHL, and the Carolina Hurricanes who are the worst in the Eastern Conference. Then they meet the Toronto Maple Leafs on Saturday night for a Sedins/Kessel showdown which should be some fun pond hockey to watch.

Making the Sedin's climb easier is that Claude Giroux suffered a head injury over the weekend and if he is out for a longer period of time than expected and Phil Kessel continues to play well - but not at his crazy scoring pace to start the year - then the Sedins should be leading the league soon enough. Henrik has 9 points in the last 5 games and Daniel has 9 points over the last 6. It wouldn't be a shock to see the Sedin name engraved on the Art Ross Trophy at the end of the year for the third straight year, but it would be kind of cool if they tied this time.