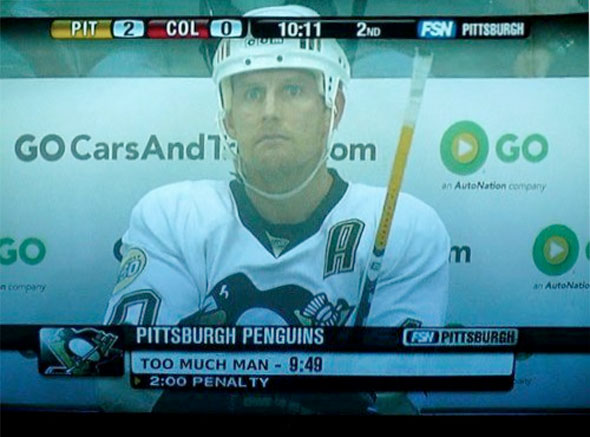 Gary Roberts is a scary, scary man and an easy selection for the Hoss Hall of Fame. Roberts was a tough kid who played hockey in the winter and lacrosse in the summer growing up in southern Ontario. Known for intensity, Roberts was a leader on any team he played for and could spark the team with a big hit, a clutch goal or a motivating fight. Some might say, he was too much man. 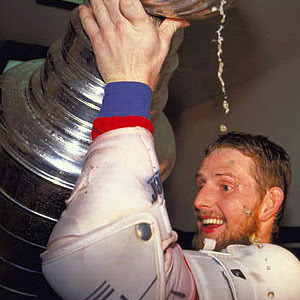 After a solid junior year with the Ottawa 67's in which he won the Memorial Cup, Roberts was drafted 12th overall by the Calgary Flames in the 1984 NHL Entry Draft. Roberts would play 2 more years in the OHL and win his 2nd Memorial Cup with the Guelph Platers in which he put up 31 points in 20 playoff games on their championship run. He would do his time in the AHL riding buses for half a year before becoming a full time player during the 1987-88 season. In his first full season, Roberts was a physical force on the ice hitting everything that moved and fighting anyone that stood in his way. He racked up what would be his career high penalty minutes in a season with 282 PIMs that year. The following year he would go on to win the Stanley Cup with the Flames and lift the Stanley Cup with a strong supporting cast of young players like Doug Gilmour, Joe Nieuwendyk, Al MacInnis and Theo Fleury.

After a few seasons in the league, Roberts wasn't just a guy that would hit and fight - he became a sniper and one of the top scorers on the Flames. During the 1991-92 season, Roberts had his best season in the NHL scoring 53 goals and racking up a career high 90 points on the season. He also still chipped in with 207 penalty minutes (despite only 5 recorded fights that season). Stats like that have fantasy hockey GMs drooling. 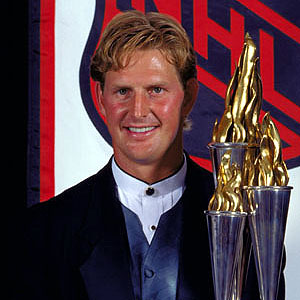 Tragedy would strike Roberts at the start of the 1994 season just 8 games in when he would suffer a serious neck injury and miss the rest of the season and most of the next with nerve damage in his neck due to bulging discs that affected the movement of his arms. Many people thought Roberts was done playing hockey, but he trained hard after two lengthy surgeries and came back near the end of the 95-96 season and shockingly put up 22 goals and 42 pts in just 32 games on his way to winning the Bill Masterton Memorial Trophy for perseverance and dedication. The Flames didn't make the playoffs that year and with his neck problems lingering Roberts decided to retire from hockey at the age of 30. Roberts would be quoted as saying: "I was in the prime of my career, and I had it taken from me", and he trained hard to take his life back.

Roberts would return to hockey the following season after feeling much better and working on his neck strength. He decided to sign with the Carolina Hurricanes and put up a solid 49 points in 61 games. After three seasons with the Canes, Roberts signed in Toronto and right away became a fan favourite with his rough and tumble style of play. He still had his scoring touch and scored 28 goals his first season and I will always remember his overtime winner against the Senators in triple overtime.

Roberts stayed with the Leafs for four seasons before short stops with the Panthers, Penguins and the Lightning and eventually calling it a career at the age of 42 in 2009. Gary didn't stay out of the game long and started training other NHLers with his extreme diets and workout techniques. His results are proven by Steven Stamkos and he has become one of the most desired trainer's for hockey players and other athletes.

Roberts was a true Hoss on the ice and would never back down from anyone, even when he was in his older years. But he could also score big goals and had a nose for the net. He scored 20 or more goals 13 times in his career and if it wasn't for some serious injuries Roberts would have came pretty close to netting 500 career goals. In 1224 games Roberts finished with 438 goals and 909 points and sits comfortably at 19th on the all time penalty list with 2560 PIMs.