The Maple Leafs started the season hot and as per usual many Leaf fans were getting excited and taking screen shots of the NHL standings when they sat at #1 in the league. But as many people predicted the Leafs and their brutal penalty killing would start slipping to the middle of the pack in the Eastern Conference.

According to CapGeek the Leafs are the 2nd youngest team in the league, but despite the youth on the team the Leafs are spending right up to the cap with just over $400k of capspace left. If you are spending that much money you should be a playoff team. The word "rebuilding" has to be kicked to the curb and a winning product should be the norm. Of the top 10 teams in spending this year, 3 have already canned their coaches as they sit out of playoff contention. 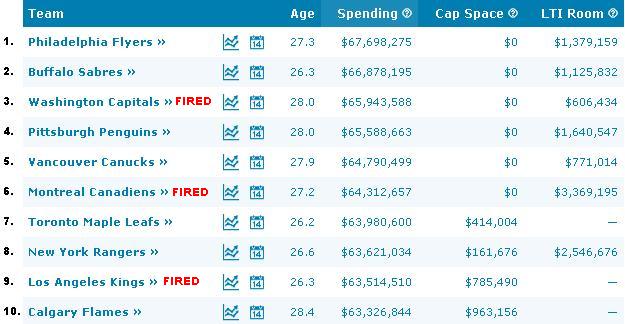 With only months left on Ron Wilson's contract with the Leafs and the team starting to slip in the standings, you would have to think Brian Burke has taken a look ahead at the upcoming games and pencilled in the must win games.

Let's take a look at the Maple Leafs schedule:

With 5 games left in December the Leafs should pick up 2 more wins for this month. Playing Buffalo at home gives the Leafs a better chance of winning by the mere fact they're not playing at the First Niagara Center, but still the Sabres just dominate the Buds. Florida is no longer a push over and Winnipeg has been surging of late. If the Leafs can't win against Carolina and the Islanders this team will be sitting out of the playoff picture to start the New Year. 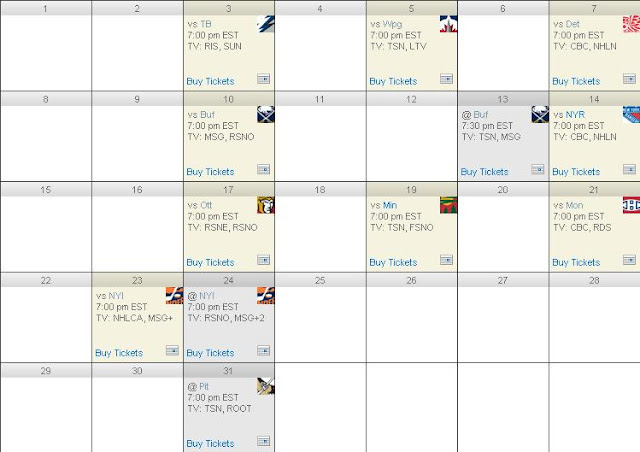 The Leafs have 12 games in January and only have to play 3 road games, should be an easy month right? Not so fast. With most games against teams sitting in playoff positions and others on the fringe, this will be a tough month. This is also the month Ron Wilson gets fired.

Ron Wilson will coach 14 more games with the Leafs, and will be fired on Sunday January 22nd, the day after a loss to the Montreal Canadiens at home in which a waffle or three may be thrown. In the those 14 games the Leafs will sport 6 wins, 6 losses and 2 OT losses. Yes, that is .500 hockey, but playing .500 hockey these days won't keep you in the playoff picture for very long in the East. Last season the Maple Leafs finished 3 games above the .500 mark, but were 8 points out of the 8th and final playoff spot.

Burke will fire Wilson after the loss to the Canadiens and he won't wait until the next week because of the All-Star Game in Ottawa. Being the type of guy Burke is, he won't want to take any limelight away from the All-Star Game and Phil Kessel's return to the fantasy draft as a top pick or potential captain. Leafs assistant coach, Scott Gordon, will be the interm coach for the following 2 games against his former club, the New York Islanders. If Randy Carlyle is still available at the time, he and Burke have a winning history and would be a likely frontrunner for the head coaching position in Toronto.

When Ron Wilson is fired the Leafs will sit 5 points out of a playoff spot.

What are your thoughts? Got a different firing date, or does Burke give him an extension?