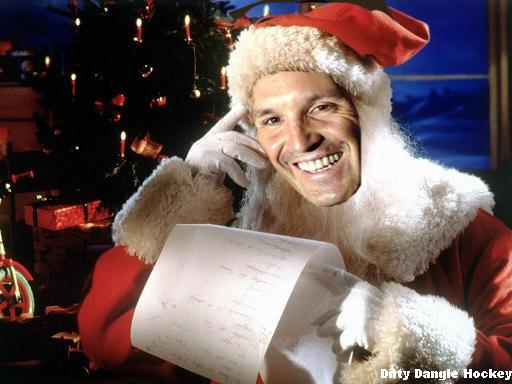 It's been quite the season for Brendan Shanahan and we're not even at the halfway mark. He's brought accountability to the NHL's disciplinary decisions with his video explanations for suspensions and even for non-suspensions. Some have praised him for his Shanabans, while others remain confused and angered over his decisions (looking at you Montreal). Regardless, Sheriff Shanahan is bringing a fresh take on handling suspensions and while you may not agree with them, at least you know why a player was disciplined.
It's at this point in the season and right before Christmas that we'd like to present you with Brendan Shanahan's Naughty and Nice Lists
The Naughty List:
Some are fairly obvious, but there are others that might surprise you:

James Wisniewski
Shanny's longest suspension so far, he clearly disagreed with how much he's getting paid this year and needed to take his salary down a few pegs.


Andy Sutton
Two suspensions so far this season, and following his most recent one for 8 games, he made it public that he doesn't like that the NHL is judge, jury, executioner and appeal court.. Shanbags was not impressed with that.

Ryan Miller/Buffalo Sabres
Shanny took offence to their response to his non-suspension of Milan Lucic. The Sabres also lead the league with 3 players suspended so far this year. Brad Boyes got 2 preseason games, Patrick Kaleta got 4 games for headbutting (and being Patrick Kaleta) and Ville Leino got 1 game for elbowing. 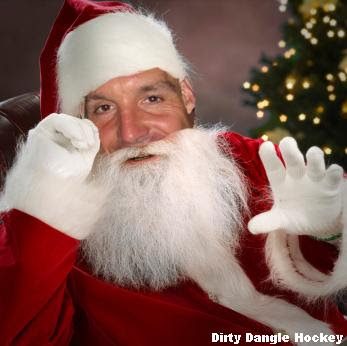 Shanny's Nice List:
The good children of the NHL that will be getting a toy this year:

Brad Boyes
0 PIMs in 21 games - After being suspended at the beginning of the NHL season for two games, Boyes is clearly scared straight as he is yet to take a penalty this season.

Daniel Paille:
0 PIMs in 27 games - Pretty impressive for a guy considered to be a grinder to not have taken a seat in the penalty box this season.

Milan Lucic
They are good friends and have bi-weekly phone chats.

Troy Brouwer
105 hits and 19 PIMs - Hard not to be impressed with a guy among the leaders in hits that has under 20 PIMs. He plays a tough, clean game and Shanny would respect that.

Matt Cooke
0 SUSPENSIONS! Matt Cooke is rehabilitated and actually has more points (13) than PIMs (12)! When Scott Hartnell called him the dirtiest player in the league on the first HBO 24/7 episode, it would have been appropriate for Cooke to reply with: "No Scott, I was the dirtiest player in the league."
Posted by Dirty Dangle at 1:19 AM
Email ThisBlogThis!Share to TwitterShare to FacebookShare to Pinterest