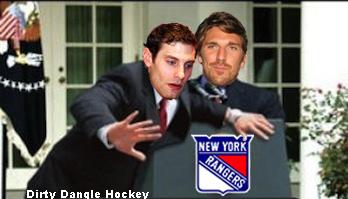 Undrafted, Dan Girardi took the free-agent route to the NHL after winning the OHL Championship and Memorial Cup with the London Knights in 2005. Girardi signed with the Hartford Wolf Pack of the AHL and began the season in the ECHL with the Charlotte Checkers. In early 2007, Girardi would get his chance to play for the Wolf Pack's NHL affiliate - the New York Rangers - and never look back. He's played in the show ever since and has only missed 2 games due to injury. That's impressive considering a major part of Girardi's game is blocking shots and hitting opponents.
Last year he led the NHL in blocked shots with 236. This year he's on pace to block over 200 pucks again. That's a lot of rubber to jump in front of, and the Rangers star goaltender, Henrik Lundqvist, couldn't be happier with it. King Henrik enjoyed his best statistical season last year with a 2.28 GAA, .923 SV% and 11 shutouts while his bodyguard Girardi had a career year defensively. In fact, since Girardi became an NHL regular, his defensive stats have been reflective of Lundqvist's goaltending stats.

As Dan Girardi blocks more shots and hits opponents, Henrik Lundqvist's GAA decreases and save percentage increases. With the exception of 2008-09 when Girardi blocked a career-low 82 shots and Lundqvist's GAA spiked 2.43, they've been reflective on one another and this year should be no different as both are on pace for career years and were both selected as NHL All-Stars. It is quite evident that Dan Girardi is more than willing to block a speeding bullet for Henrik Lundqvist, but if does get by him, there's a good chance Lundqvist can stop it too. 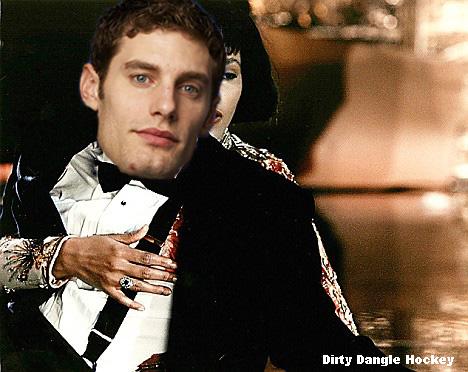 Posted by Dirty Dangle at 12:59 AM
Email ThisBlogThis!Share to TwitterShare to FacebookShare to Pinterest