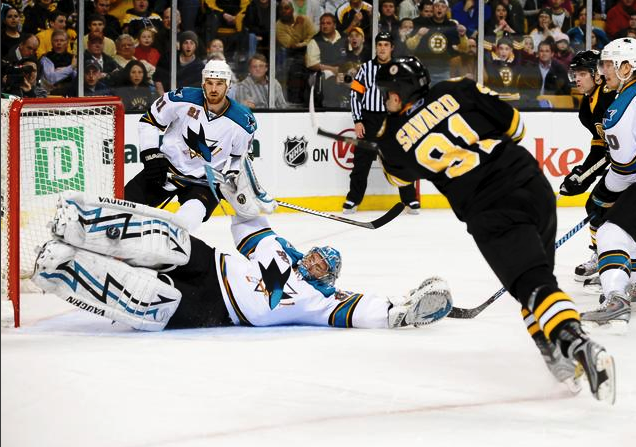 I first started playing goalie in the late 1980's as a kid and the way I learned to play was by watching NHL goalies on TV. Sadly that was a horrible era for goaltenders. They looked like stick men out there and most of them played a stand up style that made them look silly any time a player deked on them.

One of my favourite ways to make a save back then was the two pad stack. I would slide across the crease goalie pads first and kick out my legs to rob a player. I would see goalies like Bill Ranford, Kirk McLean and Andy Moog do it on Hockey Night in Canada and practice the technique out on the family backyard rink and in my games. It looked so cool and was always satisfying when successful.

Nowadays it's very rare to see a two pad stack in an NHL game. Most goalies except Tim Thomas play a butterfly style that keeps them always square to the shooter and they are rarely out of position. The two pad stack is a last resort desperation save that puts the goalie out of position. Once the goalie is down and out on their side it is hard to get back up and cover the rebound or be ready for a 2nd save.

The last time I saw a two pad stack used in a hockey game was during the World Junior Hockey Championship when USA goalie Jack Campbell slid across with two pads and the Finnish player sniped it top corner on him. If Campbell slide across in the butterfly leading with his catcher he would have had a much better chance of making that save.

During the winter break I played net for a few pick-up games with some family and friends. My style of play these days is a contrast of flopping around like Tim Thomas and the Felix Potvin paddle down. During that time I made a few two pad stack saves, but also noticed a few times I would go down and totally put myself out of position and get roofed on. Sliding on your side and trying to have the hand eye coordination while down and out is a lot harder than standing straight to the shooter. I can see why most goalies nowadays rarely do the two pad stack.

The two pad stack is clearly a save that has little use in this generation's style of hockey. Goalies are much bigger and so much quicker that they can sit in the butterfly now and slide back and forth in their crease effortlessly while covering up most of the net. The way they move seems robotic and most goalies are often described as calm or cool because they never appear to be flopping around or out of position.

I wouldn't say the two pad stack is dead just yet, but with the butterfly goaltending position the dominant style and the size of goalies entering the league, it is a rare save seen in the NHL and deserves critically endangered status. Thankfully there will always be road hockey goalies diving all over the place.

Posted by Dirty Dangle at 12:45 AM
Email ThisBlogThis!Share to TwitterShare to FacebookShare to Pinterest