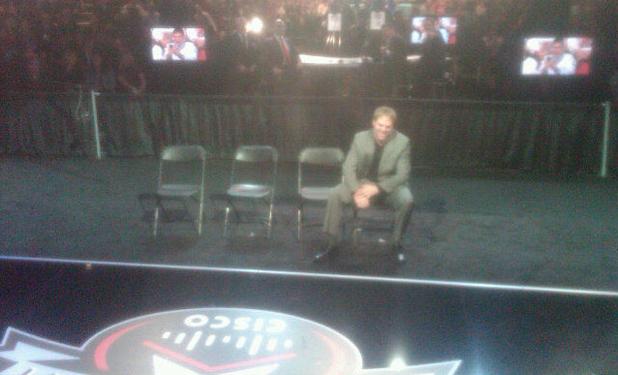 Who is getting picked last? Arguably one of the most asked questions surrounding the NHL All-Star Fantasy Draft. Last year there was plenty of talk surrounding David Backes, Paul Stastny and Phil Kessel as potential Mr. Irrelevant's, and unless you live under a rock, you know it ended up being Mr. Kessel, which made for cringe-worthy TV (no thanks to James Duthie).


This year, Kessel is back in the Draft, but among the top players this season so there is no way he's going last this year. Daniel Alfredsson and Zdeno Chara are captains this year and they will have some help with Henrik Lundqvist helping Alfredsson out for team Sweden and Joffrey Lupul who will be helping Chara pick while constantly living in fear while standing next to the big man.

So let's take a look at some of the potential Mr. Irrelevant's:

Logan Couture
The lowest-scoring forward All-Star probably has good odds to be Mr. Irrelevant in his sophomore season. After a great rookie campaign, Logan "Chicklets" Couture has 36 points through 47 games and playing in California could really affect his chances with the captains and assistants all playing in the East.

Jamie Benn
A young player making his first All-Star Game appearance is a recipe for Mr. Irrelevant. His 13 goals on the season are among the lowest of All-Star Game selected players and could hurt him if the captain's are looking at those stats. Captain's might think twice of having a player with this kind of facial hair on their team.

James Neal
The last addition to the All-Star Game as a replacement for the undeserving Alexander Ovechkin, he may be overlooked despite being tied for 2nd in goals and having a magical foot. I'm not sure if its just me, but Neal has flown pretty low under the radar this year despite his success, and this could be the case come draft time.

Jason Pominville
The Buffalo Sabres captain might have a better chance of avoiding the title with his point-per-game play resulting in him among the leaders in scoring, but he will have to be selected by a Northeast Division rival. If division rivalry plays a factor then the population of Pominville could very well be 1 at the end of the draft.

Tyler Seguin
The youngest player in the Draft has his team captain picking a team so it's hard to imagine Seguin going last, but what if Chara wants to have some fun with the rookie and make him a late round pick? Or, Seguin could go last if he sleeps through the draft...

Jordan Eberle
The man with the bedroom eyes because he always looks like he just woke up could go last as one of the later additions to the All-Star roster. While he definitely deserves the spot and was only looked over due to injury, Eberle is still one of the younger forwards on the roster and the captains may yield to the vets. 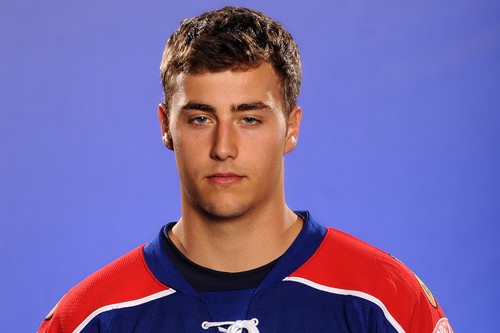 John Tavares
He's young, he's in his first All-Star Game, and he plays for the New York Islanders. All these factors make him a likely choice for Mr. Irrelevant with two veterans picking teams. While he does average a point-per-game, Tavares is routinely snubbed and this fantasy draft could be no different.

Scott Hartnell
There is a good chance most of the other players in the All-Star Game hate Hartnell as he is known to get under some players skin. The late addition to replace Jonathan Toews definitely deserves the nod and it will be his first All-Star Game which could also go against him in the Draft.

Not to pick on the forwards, but goalies have to be taken by Round 10, and defenceman by Round 15, so they can't officially be the last player picked. They can however, be the last of their position picked.

Dan Girardi
Not your typical All-Star D-man with only 17 points in 46 games, but he might just be the first defenceman to block a shot at an All-Star game. There is a pretty good chance that assistant captain Henrik Lundqvist will draft him for all those times he's jumped in front of a shot for him like a Secret Service bodyguard and save him from the 15th round.

Alexander Edler
Edler is playing the best hockey of his career, but you can bet Chara won’t be picking him because he is a Vancouver Canuck. Alfredsson might realize this and pick other players that he wants and get Edler with his last D-man pick.

Keith Yandle
The lone representative from Phoenix could find himself in the 15th round as a Western Conference defenceman from the desert. With the Eastern Conference picking the teams, Yandle could slip and his -4 could scare the captains as it is typically a high-scoring affair.

Dennis Wideman
Making his first All-Star appearance he could find himself going in the 15th round as the last defenceman. While he is tied for 3rd in defensive scoring, his last name doesn't carry the same power as Weber, Campbell,  and Letang and could hurt him. They also might not want him in the shootout competition.

Carey Price
A division rival of Alfie and Chara, Price de Nice has a good shot at being the 6th tendy picked. His stats among the 6 goalies are also the worst. His 2.41 GAA and .914 SV % put him on the 2nd page of stats on NHL.com. He is also the youngest goalie in the Draft.

Brian Elliott
While his stats are incredible, he is still Brian Elliott. A relative nobody among the group of All-Stars selected for the weekend who makes the league minimum. A great story that you'll hear all weekend, but the captains might go with the more established goalies.

Jonathan Quick
Young kid, first All-Star Game, plays in L.A so other players might be jealous of his lifestyle. If he's the last goalie to go he's a steal.

Who do you think will be Mr. Irrelevant?
Posted by Dirty Dangle at 4:43 PM
Email ThisBlogThis!Share to TwitterShare to FacebookShare to Pinterest