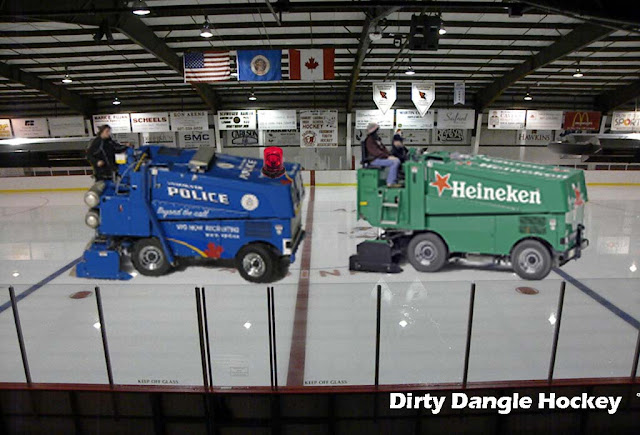 Have you ever been waiting to go on the ice and the Zamboni is taking forever? Sometimes they do an extra lap or just seem incompetent at their job when all you want to do it be out their playing. Well, imagine waiting half an hour while a hammered Zamboni driver struggled to manoeuvre the machine and crashed into the boards multiple times.

This happened in Apple Valley, Minnesota where a rink worker was arrested after minor hockey coaches called the police as the Zamboni driver attempted to resurface the ice after pounding back too many brewskies. Police arrived and after a field sobriety test, the man was booked for a DWI. While there is no video of the incident, we can only assume it resembled something like this:


Here are some other Zamboni incidents in which one might ask if alcohol was a factor.

A driver backing the Zamboni off a flatbed at the Wrigley Field Winter Classic:

Here's another driver doing some celebratory doughnuts after a game:
This figure skater doesn't even miss a beat when the Zamboni comes on too early:


Do you have any Zamboni stories from your rink?
Posted by Dirty Dangle at 12:47 AM
Email ThisBlogThis!Share to TwitterShare to FacebookShare to Pinterest