Erik Cole: A Giant in Montreal 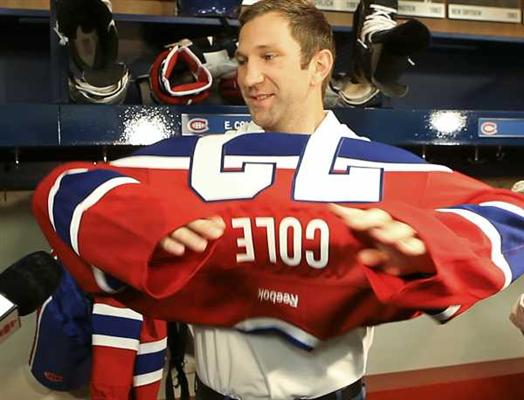 As a Toronto Maple Leafs fan, it is my job to laugh at the Montreal Canadiens and their short comings this season (short comings can also relate to the size of most of their players). This year I've had plenty of material to laugh about: Scott Gomez goalless drought, the battles of what language the coach speaks, trading Mike Cammalleri mid-game, and the usual injuries that have most of their defenceman skating on one leg.

I can remember last July when the Canadiens signed Erik Cole to 4 year contract worth $18M. I was shocked that the Habs would pay him $4.5M a season and thinking they were just desperate to sign someone that could ride rollercoasters.

Well so far this season the 33-year-old Cole is having a career year as he is on pace for 31 goals and 64 points. Cole's previous best goal season was 30 goals in 2005-06. Cole was on fire that year and scored 30 in just 60 games. If Cole can stay healthy there is a very good chance he will set career highs in goals, assists and points.

Cole is also playing well in his own end and is a +10 on a team that is 9 points out of the playoffs. The Habs were looking for a big body and someone to drive to the net and they definitely found that type of player in Cole. I don't think many people were expecting Cole to come in and lead the Canadiens in points like he is this year and it will be interesting to see if he can keep it up, not just this season, but for the remainder of his contract. So far this year Cole has been one of the rare bright spots for the Canadiens.

Do you think Erik Cole will score 30 goals this year?
Posted by Dirty Dangle at 12:11 AM
Email ThisBlogThis!Share to TwitterShare to FacebookShare to Pinterest