Goalie Trips, Gets Hit By Referee In Austrian Winter Classic 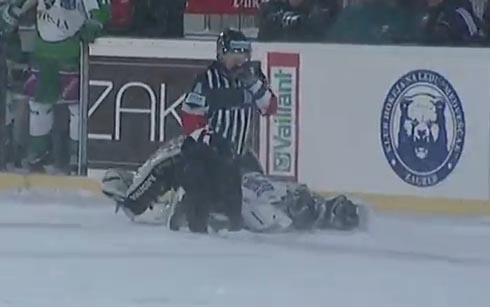 When you pull your goalie for an extra attacker, you want them to get to the bench as fast as possible. However, skating as hard as you can with giant pillows on your legs and weird skates can sometimes result in disaster. Slovenian goaltender, Matija Pintarič, found this out during the Erste Bank Hockey League (Austrian Hockey League) 2012 Winter Classic between his HDD Tilia Olimpija Ljubljana and KHL Medveščak Zagreb as he skated to the bench for an extra attacker.

The sportscasters can laugh because Pintarič was not seriously injured and would back-up their next game:


Pintarič trips near the blueline and as he recovers gets levelled by the referee skating backwards. To add insult to injury, Medveščak would score on the open net, but the goal would be called back due to the series of events that took place prior. Ice conditions could have been a factor for the trip, but at least only 4,500 fans saw the blooper at the small-scale outdoor game.
Posted by Dirty Dangle at 12:57 AM
Email ThisBlogThis!Share to TwitterShare to FacebookShare to Pinterest