The Kings Goal Scoring Is All Dried Up 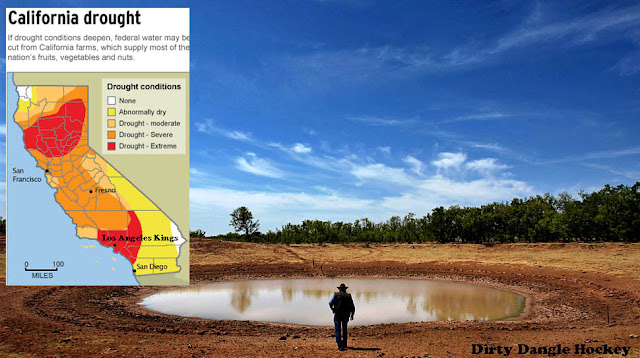 Things just aren't clicking in Los Angeles these days as the goals have dried up. The Kings have scored a league low 124 goals in 60 games - just 2.07 goals a game. They've been shutout eight times this season for 2nd most in the league, and this includes five 1-0 losses. If it wasn't for some stellar goaltending from Jonathan Quick, the Kings wouldn’t be anywhere near the playoffs. They are currently sitting in 8th right now with the Calgary Flames and Dallas Stars hot on their heels.

When you look at their roster, every player seems to be having an off year. Anze Kopitar has 17 goals and 51 points in 60 games and is on pace for his lowest goal total since breaking into the league, and his lowest point total since 2008-09. For a player with a $6.8M cap hit the Kings were hoping for a little more goal production from the big Slovenian. But he's not alone on the higher expectations list.

Mike Richards who was brought in when they traded away Wayne Simmonds and Brayden Schenn and 2nd rounder is also not producing for the Kings this year with 14 goals and just 30 points in 52 games. Whereas Simmonds is having a career year in Philly with 22 goals and 39 points and Schenn has played solid since returning from concussion earlier in the season. Looks like the Kings got fleeced in this deal.

Other forwards like the oft-injured Simon Gagne, captain Dustin Brown and winger Justin Williams have a combined 32 goals between them and will have to pick up some of the scoring slack if the Kings want to make the post season. We won't even get started on Dustin Penner.

Drew Doughty, the Kings $56 million dollar man, also needs to pick up his offensive production. After holding out during training camp, Doughty has just 26 points in 55 games, which isn’t bad for most defenceman, but when you are making $7M a season till 2019, you have to be putting up better numbers than that. Jack Johnson has played well and sits 5th on the team in scoring with 8 goals, but defensively he is a chilly -10.

These are frustrating times in La La Land and if the Kings can't find a way to score some goals in the last 6 weeks of the season, there is a very good chance they will be sitting outside of the playoffs and GM Dean Lombardi might be looking for another job.

Posted by Dirty Dangle at 12:18 AM
Email ThisBlogThis!Share to TwitterShare to FacebookShare to Pinterest