Retro Fantasy Hockey is a feature that will take you back to an outstanding fantasy
hockey performance by a player or goalie in which their stats would have made you
drool at the time, if not have you still drooling, as they were just that exceptional. 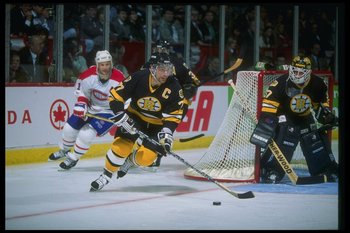 Year: 1993-94
Player: Ray Bourque
There are few defenceman that go in the first round of fantasy hockey drafts, but there are also few defenceman like Ray Bourque. While he had some amazing fantasy hockey years as a d-man, one stands out when we look at his stats - the 1993-94 season. (Editors note: some season statistics are unavailable for 1980s so this season reflects his best)

Let's start with the basic stats:

The early 90s saw defenceman putting up point totals you can only hope for out of a star forward in the current NHL, and Ray Bourque's 91 points in 1993-94 have not been matched by a defenceman since. Bourque's 71 assists placed him 2nd among d-men after Sergei Zubov's 73, and his 91 points would edge out Zubov in overall defensive scoring, but even more impressive is that he beat him in 6 less games. The PIM totals are fairly average, and his +/- was good enough for 16th among defenceman, but there's a reason his +/- wasn't as reflective as his point total.

52 powerplay points including 42 assists with the extra man are something to drool about if you're a fantasy owner. Bourque is arguably one of the best powerplay quarterbacks and his powerplay point totals reflect that, but he could also throw up some points while killing penalties. 3 shorthanded goals and 5 points total are very solid stats to get from any player, but from a defenceman is just icing on the cake. Special teams stats like these are what can make your fantasy season and you'd be loving life if you drafted Ray Bourque, but there's still one unbelievable stat left from this season.

386 shots! From a defenceman! Before you start pulling your hair out, you should know that Ray Bourque is the all-time shots on goal leader in the entire NHL and led the league in shots for 3 seasons in his career. Remember that Ron Tugnutt 70 save performance in 1991? Well Bourque took 19 shots that game. His highest shot total this season would be 12, but to average over 5 shots a game still gets my poolie blood flowing. Unfortunately, his 1 game winning goal (stupid stat anyways) would have you dissappointed as it was down from his previous 7 game winners in 92-93, but nonetheless, what a season from Raymond Bourque as he would take home the Norris Trophy for best defenceman that year for the fifth and final time.
With goalies like this, it sure would have been fun to participate in Fantasy Hockey in the early 1990s:
Posted by Dirty Dangle at 1:29 AM
Email ThisBlogThis!Share to TwitterShare to FacebookShare to Pinterest