Rick Nash Has To Want Out Of Columbus Right?

The Blue Jackets made a big splash this past offseason and overpaid for defenceman James Wisniewski and gave up some youth to acquire Jeff Carter in a trade. Carter has only played 31 games so far and there are already rumours he will be dealt this trade deadline. You have to wonder if Rick Nash is jealous.

Nash who is in his second year of an 8-year contract, is having an off year and with only 17 goals and 34 points in 52 games. You have to wonder what motivates him out there with the Blue Jackets already out of the playoff picture. Now it's just about lacing up the skates and playing out the schedule until the season is over. It's just after the All-Star break (which he didn't even get chosen for this year) and his season is done. That's tough, but he's probably used to losing by now.

But Rick Nash isn't a complete loser. He was the 1st overall pick in the 2002 NHL Entry Draft, won the Rocket Richard Trophy as a sophmore, won the Swiss Championship with Davos and the Spengler Cup during the lockout, won Gold at the World Championships in 2007 and also won Olympic Gold in 2010. He's just a big loser when he plays for the Columbus Blue Jackets. Just take a look at how many times he's experienced losing in the NHL with the Columbus Blue Jackets: 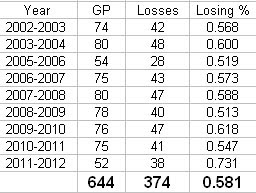 There's been some brutal losing stretches in those seasons as well, not including the one to begin this season. From November 11th, 2009 to January 5th, 2010, the Blue Jackets had a 24 game stretch in which they lost 21 games. Now I don't know about you, but losing sucks and I don't know how Nash decided he wanted to stay with this culture of losing another 8 years. He must have knocked up a few bartenders and has little baby Rick Nash's running around Ohio.
Nash will turn 28 this June and still has plenty of good years left in him, but he is locked up now in a contract till 2018 with the Blue Jackets. He is being paid well by them at $7.8M a season, but as the captain of the team you can't really see him publically asking to be traded, especially after committing to staying with the team until he's 34.

With a few spare parts becoming UFA's next season on the Blue Jackets, they will have some money to play with in the offseason, but does anyone really see this team becoming at least an 8th seed playoff team in the near future? You have to wonder if Nash is just so used to losing now that hockey is now more just about a pay cheque and setting personal goals... and representing Canada at the World Championships
every spring.